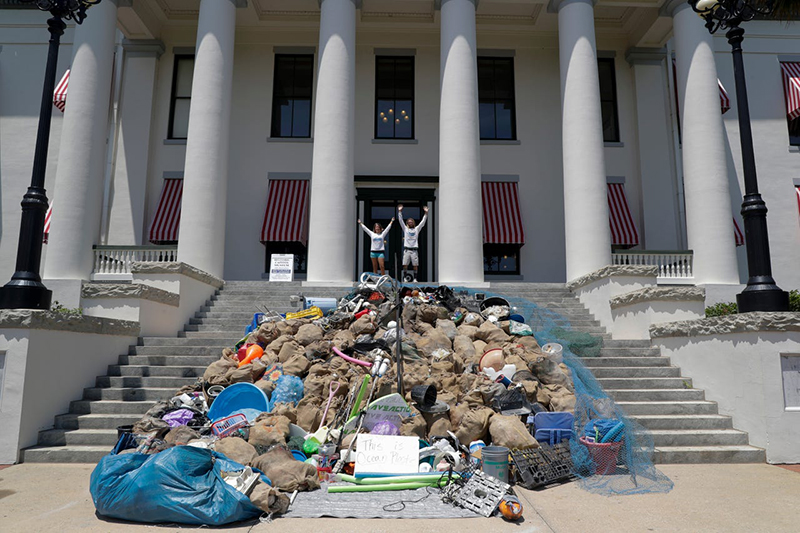 ABOVE: Heather Bolint of Lake Worth and Bryan Galvin of Delray Beach stand on the steps of the state Capitol in Tallahassee, where they obtained a permit to display the burlap bags holding some of the trash they found. The placard reads: This is Ocean Plastic. BELOW: The two friends walked 1,200 miles around Florida’s perimeter to raise awareness of plastic waste on the state’s beaches. Photos provided 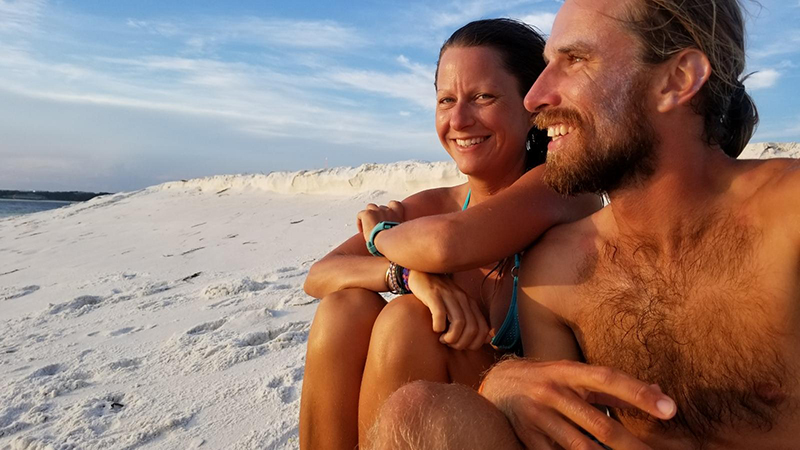 In the end they piled their trash on the steps of the state Capitol in Tallahassee.
Last February, Bryan Galvin quit his job as a lifeguard at the St. Andrew’s Club in Gulf Stream, and on March 1, he and a friend, Heather Bolint, left Amelia Island, near the Georgia line, on a mission they called “PlasTrek 2019.”
Armed with 300 burlap bags, a blue Dodge Dakota pickup, a canoe and a smartphone, Galvin, 28, of Delray Beach, and Bolint, 32, of Lake Worth, would trek the 1,200 miles of Florida’s coast, picking up plastic litter along the sand. Bottles and bottle caps, straws, bags — whatever they found soiling our beaches.
They would photograph it, save it, store it, sort it, count it and, in the end, display it on the Capitol steps in a plea for the end of unsustainable plastics.
The plan was to reach Pensacola by mid-June.
But plans change. Plastic happens.
They started out averaging 15-20 miles a day, but once past Sebastian Inlet, nearing South Florida, the plastic waste increased and their progress slowed.
“This isn’t a beach cleanup,” Galvin proclaimed when the pair reached Gulf Stream on April 3, 34 days into the quest. “It’s an awareness trek.”
Their schedule had them at Spanish River Park in Boca Raton that evening. They made it as far as Atlantic Dunes Park in Delray Beach.
A week later, they were five miles from the south end of Miami Beach and April 29 found them resting in Everglades City after an eight-day, 100-mile paddle through the Everglades.
By May 24, they’d reached Manasota Key, about 35 miles south of Sarasota, and on June 27 they were enjoying Santa Rosa Beach, 80 miles east of Pensacola.
They didn’t make Pensacola by mid-June, but they made it.
“We finished on July 1,” Bolint reports, “four months to the day after we started,” and one day after she turned 33. “We drove to the very end of Fort Pickens and watched the sunset on the beach. It was one of the most beautiful we’ve seen in the entire four months.”
Now they needed a break. Galvin came home to Delray Beach, while Bolint visited her father on St. Simons Island in Georgia.
Of the 300 burlap bags, they’d filled about 250, which were stored at the homes of friends and family in Melbourne, Jupiter, Delray Beach and Panama City.
Galvin guesstimated they had about 3,000 pounds of plastic trash.
They also had nearly 10,000 photos capturing each piece of trash they found, sometimes group photos.
“When we upload them, we’ll get a final count,” he promised.
They wanted to display what they’d found on the Capitol steps in an unapologetic publicity stunt for the cause of clean beaches. Maybe the governor could drop by, along with some news media. For that, they’d need a permit.
“The lady was concerned that 3,000 pounds might damage the historic steps,” Bolint says, “but I assured her it would be all right, they were just plastic bottles.”
The permit was issued for Monday morning, July 29.
Let the sorting begin.
“We ran out of time to count it all,” Galvin concedes. Based on what they had counted, they’d found 55 categories of plastic waste, the top six being bottle caps and lids, bags, bottles, food wrappers and containers, beach toys and straws.
“I went the entire trek trying to keep plastic-free,” he says, “but it was impossible. Even the Whole Foods bags had little plastic windows in them.”
On Sunday, July 28, Galvin and his brother Sean left Delray Beach in Sean’s truck and trailer and retrieved the bags they’d left in Jupiter and Melbourne.
Bolint left St. Simons Island and headed for Panama City to collect another load stored there.
She reached Tallahassee at midnight, the Galvin brothers arrived at 5:30 a.m., and at 9:30 they met at the Capitol.
“It took us about two hours to set it up on the steps, and I still had a pallet and a half we left behind in the truck,” Galvin says.
“We didn’t even get through half of it before reporters were showing up and people were taking pictures.”
The governor didn’t drop by, but the local NBC and ABC affiliates put them on local TV news, and The Tallahassee Democrat and Capitol News Service did stories.
In the end, their four-month, 1,200-mile, 3,000-pound PlasTrek collection sat on the Capitol steps just about two hours. Then they gathered up all those bags and stored them in a friend’s barn stall in Tampa.
“It’s not going to the landfill yet,” Galvin says. “We hope to set it up in other places or maybe a little in each place, or several at a time.”
Bolint is back in Lake Worth, still scoping out a new adventure.
“I’ve applied to work at a sustainability school in the Bahamas,” she says.
Galvin is working at The Surf District, a surf shop in Delray.
And would they do it all again?
“No, I don’t think so,” Bolint says. “It was just getting really hot, and we were trekking in the middle of the day with the sun beating down on us, blistering.”
She pauses. “Well, maybe if it was a different time of year.”
Galvin is more amenable.
“It was hard,” he concedes, “but I don’t feel anywhere near done yet. Maybe the hiking part would have to be done differently, maybe with a team.
“But why would we stop? We need to solve a problem.”