After about two years of exploratory talks, Boynton Beach-based Bethesda Health and Coral Gables-based Baptist Health South Florida have agreed to merge.
The agreement, announced on Oct. 2, calls for a two-year transition period. But even before the merger is completed on Sept. 30, 2017, Palm Beach County residents could see changes, including new outpatient and urgent care facilities.
Both hospital systems stand to benefit by combining forces. The merger will allow highly regarded Baptist Health, the largest hospital system in Miami-Dade County with six hospitals there and one in Monroe County, to expand into Palm Beach County. 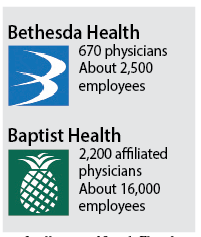 Bethesda Health, which operates Bethesda Hospital East and Bethesda Hospital West, will gain by being able to tap into Baptist’s experience in establishing outpatient and urgent care facilities. Bethesda also will become part of a larger organization that has the heft to recruit high quality physicians and to negotiate better contracts for goods and services.
Like Bethesda, Baptist is “not-for-profit and committed to quality. That is the model Bethesda has been built on. We felt they would be a good partner,” said Roger Kirk, president and CEO of Bethesda Health.
“Baptist has been looking at expansion opportunities in northern Broward and southern Palm Beach (counties),” said Wayne Brackin, executive vice president and chief operating officer of Baptist Health. “Bethesda has strategies around outpatient expansion. We are talking about how to get those things in sync and accelerate everyone’s plans.”
Both Kirk and Brackin said the two hospital systems are merging assets and no money is changing hands.
Bethesda’s executive team and board will remain unchanged, as will the names of the two hospitals. The Bethesda Hospital Foundation also will stay in place, and money it raises through fundraising will continue to go to the two Bethesda hospitals, Kirk said.
The merger comes at a time of huge changes in health care that, among many other things, are pushing hospitals to consolidation, greater efficiencies and an emphasis on coordination of care and reducing the cost of care. That, in turn, increases the need to expand into outpatient and urgent care centers where care is less costly than in hospitals.
Most hospitals in Palm Beach County are part of the HCA Holdings Inc. or Tenet Healthcare Corp. hospital chain. Bethesda was one of the few that remained a stand-alone.
“As the industry changes, it is moving health care to an outpatient basis and one based on ease of access,” Kirk said. “We know we have got to grow, expand our services and put our services in the backyard of our community. We have to make our services and programs easily accessible.”
Baptist’s nearly 50 outpatient and urgent care facilities in Miami-Dade, Monroe and Broward provide a model for Bethesda, he said.
Brackin said Baptist has opened three diagnostic centers and five urgent care centers in Broward. “People in northern Broward who we are taking care of as outpatients may choose Bethesda for in-patient needs,” he said.
He said it is likely that Bethesda’s expansion into outpatient facilities could begin during the two-year transition period. Also underway already are efforts such as coordination of equipment purchases, merger of information technology systems and strategic planning for medical staff.
Baptist is developing the $430 million Miami Cancer Institute scheduled to open next year at the Baptist Hospital campus. Brackin expects Bethesda’s cancer care physicians will become part of that institute and will take part in the clinical trials that will be made available to Palm Beach County residents.
Linda Quick, president of the South Florida Hospital & Healthcare Association (a non-profit alliance of South Florida hospitals, medical centers and educational institutions), said it makes sense for Baptist and Bethesda to merge. “Baptist has already found that with its hospital system, it is able to be more efficient than any one (hospital) had been by itself,” she said. “For Bethesda, being part of a larger system … is a good reason to have come to this engagement party.”
Bethesda Health has 670 physicians and more than 2,500 employees. It includes Bethesda Health Physician Group, Bethesda Heart Hospital, Bethesda Orthopaedics Institute, Cornell Institute for Rehabilitation Medicine, the Center for Women and Children, Bethesda College of Health Sciences and accredited centers for stroke, chest pain and heart failure.
Among its recognitions, Bethesda Hospital East was listed by Becker’s Hospital Review as among the top 50 hospitals nationwide for the lowest proportion of serious medical complication rates for patients and received a “A” rating by the National Leapfrog Group for Safety and Quality in 2014.
Baptist Health has 2,200 affiliated physicians and about 16,000 employees. It includes Baptist Health Medical Group and Baptist Outpatient Services. Its hospitals are Baptist Hospital, Baptist Children’s Hospital, Doctors Hospital, Homestead Hospital, South Miami Hospital and West Kendall Baptist Hospital in Miami-Dade and Mariners Hospital in Monroe.
Baptist Health hospitals consistently do well in annual rankings by U.S. News & World Report. This year, Baptist Hospital ranked No. 1 in South Florida and Homestead Hospital ranked No. 7.