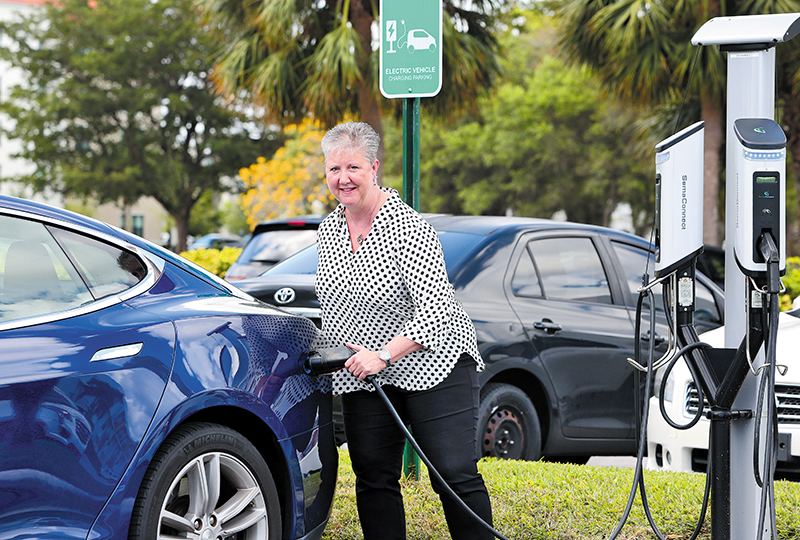 BELOW: Peel plugs in her Tesla at work, where she gets free charging. 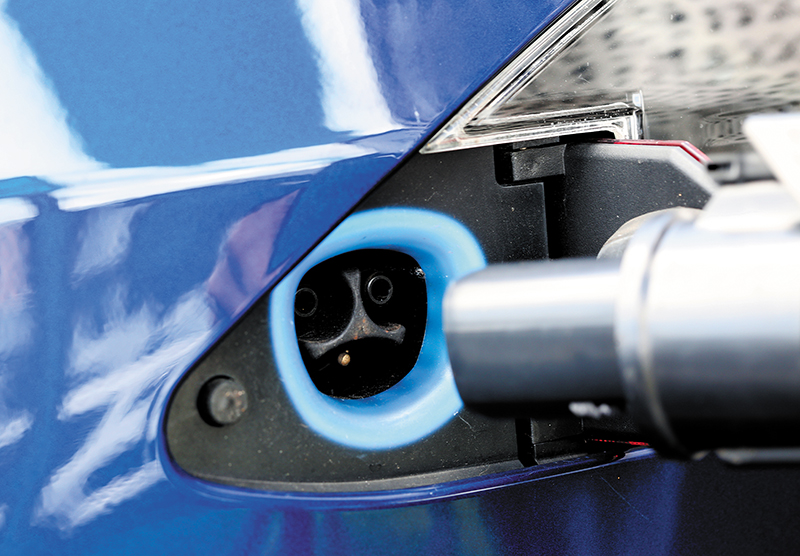 It’s not your imagination: You’re more likely to see a Tesla electric vehicle in Boca Raton or on State Road A1A than anywhere else in Palm Beach County.
Despite being Florida’s 23rd-largest city, Boca Raton has the state’s third-highest cluster of Tesla EVs, behind only Miami and Fort Lauderdale, the California-based automaker says. The concentration continues up the barrier island to South Palm Beach and Palm Beach, making a short skip over Ocean Ridge and Manalapan.
“Two years ago we didn’t see a lot of Teslas. Now when we go to Boca we see 50,” said Craig Henne of South Palm Beach, who bought the company’s premium SUV, a white Model X, in 2017.
Tesla boasts on its website (Tesla.com/carbonimpact) that its vehicles have saved a cumulative 3.6 million tons of carbon dioxide from getting into the atmosphere. Until March it also listed the top cities and top ZIP codes where its cars are saving on greenhouse gases.
Its figures showed Teslas in Boca Raton and west Boca saved the equivalent of 35,979,242 pounds of carbon dioxide that vehicles with internal combustion engines would have emitted, or a per-capita average of 386 pounds.
According to the Environmental Protection Agency, that’s a significant amount. Greater Boca’s Tesla owners have saved the equivalent emissions of:
• Burning 216 tanker trucks full of gasoline, or
• The CO2 equivalent from burning enough coal to fill a mile-long coal train, or
• The emissions that would be produced from driving the average U.S. gas car far enough to get to the moon and back — 101 times.
Boca Raton also ranks No. 27 on the automaker’s list of the nation’s top 50 cities, ahead of much-larger Phoenix and Denver. Miami is 8, and Fort Lauderdale is 23. Tampa, Orlando and other Florida cities are no-shows. 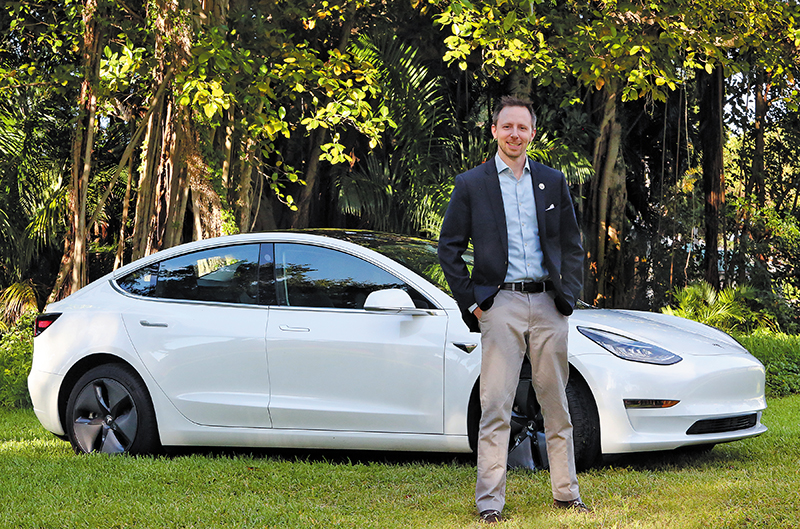 Boca Raton Deputy Mayor Jeremy Rodgers shows off his Tesla sedan, the Model 3, in Silver Palm Park. He had to wait two years to get the car after he placed the order. Photos by Tim Stepien/The Coastal Star

Jeremy Rodgers, the city’s deputy mayor, jumped on the bandwagon for Tesla’s mass-market sedan, the Model 3, as soon as he could, sending his wife and kids to Town Center mall to wait in line and make a down payment on March 31, 2016, the first day reservations were accepted. Almost two years later the company emailed him to say it was ready to accept his order.
“It’s probably the first one in the city,” Rodgers said.
Another Boca Raton resident who owns a Tesla is Michele Peel, past president of the Friends of Gumbo Limbo.
“This is the most fun car I’ve ever had,” Peel said. “It drives like a dream.”
She bought her blue Model S, the automaker’s premium sedan, in 2016 after years of owning a Toyota Prius hybrid, which used electric power, gas or both.
Even though the Prius gave Peel 50 miles per gallon of fuel, “I do not miss going to gas stations one bit,” she said.
The Model S is actually Peel’s second Tesla, she said. The first was a stuffed doll she bought at a museum of Serbian-American engineer and physicist Nikola Tesla, who invented the first alternating-current motor.
Tesla’s list of the top 50 ZIP codes in Florida leads off with Miami’s 33156, followed in second place by 33496 (roughly the northern part of west Boca). Other Boca ZIP codes on the list are 33432 (the eastern part of the city south of Red Reef Park); 33433 (the south-central area of west Boca); 33487 (Highland Beach and the northeast part of the city); and 33431 (the east-central part of Boca Raton).
Other top ZIP codes are 33480 (South Palm Beach and Palm Beach) and 33483 (coastal Delray Beach and Gulf Stream).
Six California cities top the national list, with Atlanta at No. 7, Boca Raton at No. 27, Phoenix at No. 28 and Denver at No. 31. California cities claim 31 of the top 50 spots.
Henne, the South Palm Beach owner, said he is “not a global warming guy.”
“A lot of people think they’re saving the planet,” said Henne, whose previous vehicles include an electric smart car and a Chevrolet Corvette. “I just think it’s such an awesome piece of equipment.”
The best part of owning a Tesla “is we pay nothing to get it charged,” said Henne, who picked up his car two weeks before the manufacturer ended its policy of lifetime free charging. New owners of a Model X or S today get only one year of free charging; Model 3 owners are on their own.
“The car is an absolute rocket,” Henne said. “It’ll do 150 — but not with me behind the wheel.”
Peel, a strategic marketing manager for environmental consultant Geosyntec, gets free charging at work as a tenant at 900 Broken Sound Parkway NW. Other EVs charging at the office building are a BMW, another Model S and two Model 3s, she said.
People know it’s Peel when she drives up, she said. “You don’t see that many bright blue ones.”
In March, Tesla opened a new supercharger station at the Wawa store on Hillsboro Boulevard just west of Interstate 95 in Deerfield Beach. Owners who don’t qualify for free charging pay 26 cents per kWh, a little more than double what they would pay to charge at home.
The company says it will open another supercharger station somewhere in Boca Raton this year, but has not released details on its location or opening date.
A map on its website suggests it will be close to the Town Center showroom.