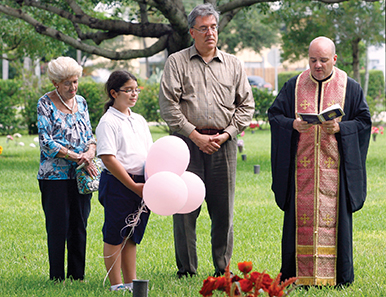 of St. Mark Greek Orthodox Church in Boca Raton pray over the grave

of Athena Sperantsas. They released balloons into the sky to honor Athena’s birthday.

Nine-year-old Ellie Ana Sperantsas sends messages to heaven.
They arrive via pink balloons with pink ribbons and typewritten notes, the contents of which only Ellie Ana, a fourth-grader at Gulf Stream School, knows.
Ellie Ana’s grandmother, Athena Sperantsas, who was an award-winning typist in her day, taught Ellie Ana to type. And typing is a special way for granddaughter and grandmother to communicate.
Why the pink ribbons and the pink balloons?
“Because pink is my favorite color and she liked what I liked,” Ellie Ana explains.
Athena Sperantsas died on Jan. 8 at age 87. And because the two share and celebrate late September birthdays, a balloon launch was planned at Boca Raton Cemetery on Sept. 28.
After a short prayer service led by Father Mark Leondis from St. Mark Greek Orthodox Church in Boca Raton, it is time for the balloon launch.
“How much did you love your Yaya?” Ellie Ana’s father, Dean Sperantsas, asks.
“A lot! A lot!” Ellie Ana replies.
“How much did your grandmother love you?” her father asks.
“As much as every drop in the ocean,” Ellie Ana answers.
With a running and joyful leap, Ellie Ana sends the balloons skyward.
“Dad! It didn’t get caught in the tree!” Ellie Ana cries out.
“I see! I see!” her father answers. “You made it work!”
The family then heads to Maggiano’s with Anastasia “Bess” Hatsis, her grandmother’s best friend, for a birthday celebration.
Ellie Ana’s mother, Christy, died when Ellie Ana was just 3 years old and Ellie Ana and her grandmother grew very close.
“There were days she prepared food for her grandmother who was 80 years older than her, and cared for her,” Dean Sperantsas says of his daughter.
For the first balloon launch this spring, Ellie Ana typed letters to her mother, grandmother and grandfather, who died when Ellie Ana was 6.
“It was her initiative entirely,” Dean Sperantsas remembers. “She typed up letters on an old-fashioned typewriter on her own. She put them in an envelope and sealed them. She attached the letters to each of the balloons and joyously launched them into the heavens.”