A surge in home sales few could have imagined in the early stages of the pandemic one year ago is sending a relentless stream of prospective buyers from across the country at virtually every listing they can find in Highland Beach and Boca Raton.

“This is once in a lifetime,” said Carmen D’Angelo, broker and owner of Premier Estate Properties in Boca Raton. “We’ve never had this where there’s been such a demand for high-priced homes.”
A sale this year for $21.8 million in Highland Beach marked the highest D’Angelo knows about in the town, he said.
In southern Palm Beach County, the median sales price jumped 25% for single-family homes in 12 months, with buyers snapping up so many homes the inventory available for purchase plunged 63% in February compared with a year before, according to the Broward, Palm Beaches and St. Lucie Realtors organization.
Fresh inventory tends not to last long. A newly constructed home in Boca Raton’s Sanctuary community, for instance, sold within 30 days of completion for $12.2 million, D’Angelo said.
Properties in Highland Beach’s Ocean Cove neighborhood under contract for $4 million and $3.2 million represent prices 20% higher or more compared to a year earlier, said Brittany Belcher, agent for Lang Realty in Boca Raton.
“The market is going nuts right now,” she said.
Many properties are moving off the market in one to five days after listing, she said.
Homes are frequently selling for about 30% more in Royal Palm Yacht and Country Club in eastern Boca Raton compared to a year before, said Belcher’s mother and partner agent, Olive Belcher. 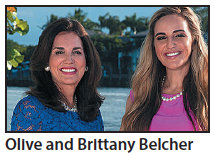 Most buyers are coming from other states, from New York to California to Georgia, but as pandemic restrictions begin to ease somewhat, more international buyers are showing interest as well, Olive Belcher said.
Shrinking inventories of homes for sale represent one of the few brakes on the frenzy.
But it already has been an indelible 12 months and a head-spinning start to 2021.
“Last year companywide we did $1.5 billion in sales,” D’Angelo said. With only a third of 2021 completed, he said, “we’ve already reached $1 billion.”
Since the pandemic started, buyers have often made decisions without seeing properties in person, relying on online videos, photos and Zoom calls, he said.
“Prices are up, all across the board,” D’Angelo said. “Inventory’s low.”
Nationally, March proved to be the hottest month in housing since at least 2012, according to real estate brokerage Redfin Corp.
U.S. home prices rose 17% compared to the same month a year earlier.
And the median price climbed higher still in one of the nation’s most incandescent markets, Palm Beach County, rising nearly 18%.
In March, the number of homes sold across Palm Beach County increased 35% to 4,213 compared to a year earlier, Redfin said.
In part, that reflects a bounce from the early effects of the pandemic in March 2020. The first restrictions, closures and lockdowns initially depressed sales and stoked uncertainty and fear about how bad the economic damage might be.
But as working from home became the norm, people from all over the country who had the means to move decided Palm Beach County might not be a bad place to call home. As months passed, a steady increase in interest turned into a tidal wave.
By the fourth quarter of 2020, Palm Beach County led all major U.S. markets tracked by Redfin with a 115% increase in luxury home sales compared to the last three months of 2019. Luxury in this instance means the top 5% of costliest homes in the market, with a median sales price of $1.8 million, though sales of homes across the middle to upper price ranges in the county also registered significant increases.
“The current climate is fantastic for sellers,” said Dave Petruzzelli, owner and partner of Petruzzelli Real Estate in Boca Raton. “On the other hand, it’s frustrating for buyers, since many sellers are receiving multiple cash offers close to, or above, asking price.”
If the buyer is financing, that can be another potential obstacle when trying to compete with cash buyers, he said.
“Between extraordinarily low inventories, low rates, and a greater-than-normal influx of out-of-state buyers, there will continue to be upward pressure on pricing,” Petruzzelli said.
His firm’s last condominium listing on Boca Raton’s barrier island was on the market for only nine days, he said.
Townhouse, villa and condominium sales increased to 63 on Boca Raton’s barrier island in March, compared to 26 in the same month a year earlier, according to data from BeachesMLS that Petruzzelli cited. Single-family home sales increased to six from five.
The average sales price has not necessarily increased in every neighborhood in such a limited snapshot, where an expensive deal or two can skew the average. Still, in Highland Beach, single-family home sales increased to five from one the previous March, and the average sales price increased to $8.4 million from $4 million.
Townhouse, villa and condo sales in Highland Beach grew to 40 from 19 the previous March, with the average price slightly lower at $964,000 compared to $972,000.
Though inventory is getting tighter, pandemic restrictions and rising taxes in other states have pushed many more buyers this way, Petruzzelli said.
“The typical customer we have walk into our office is from the New York/Northeast area with an eye on now making Florida their permanent home,” he said.
Petruzzelli’s own family moved to Boca Raton in 1946, he said. His grandfather opened a real estate office at the firm’s current location on North Ocean Boulevard. He grew up on Boca Raton’s barrier island and has been licensed since 1979.
And this has been a year like no other, he said.
“We have received offers from purchasers without seeing the property via Facetime, some because of COVID concerns, others because they did not want to lose out on the deal,” Petruzzelli said. “It has been an unprecedented year in sales, and until supplies increase or some other cataclysmic event occurs, prices shall remain strong.”