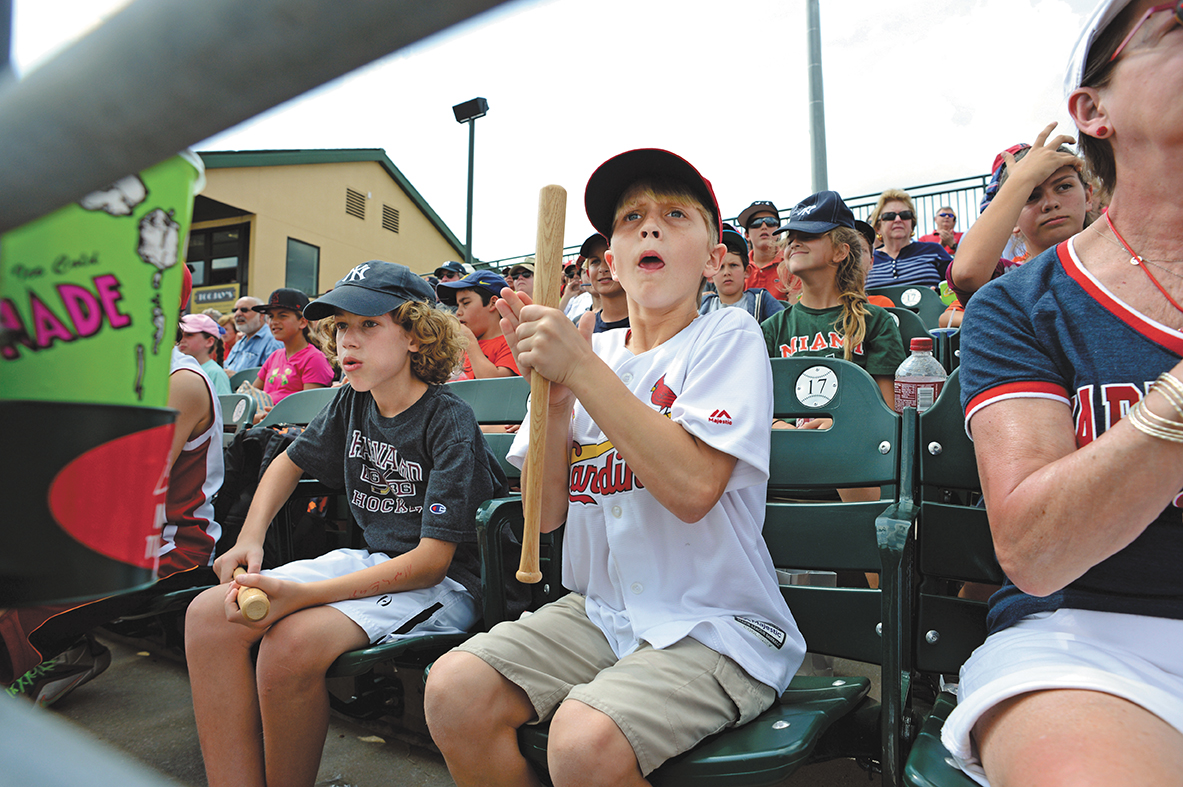 went to Roger Dean Stadium to watch a baseball game. 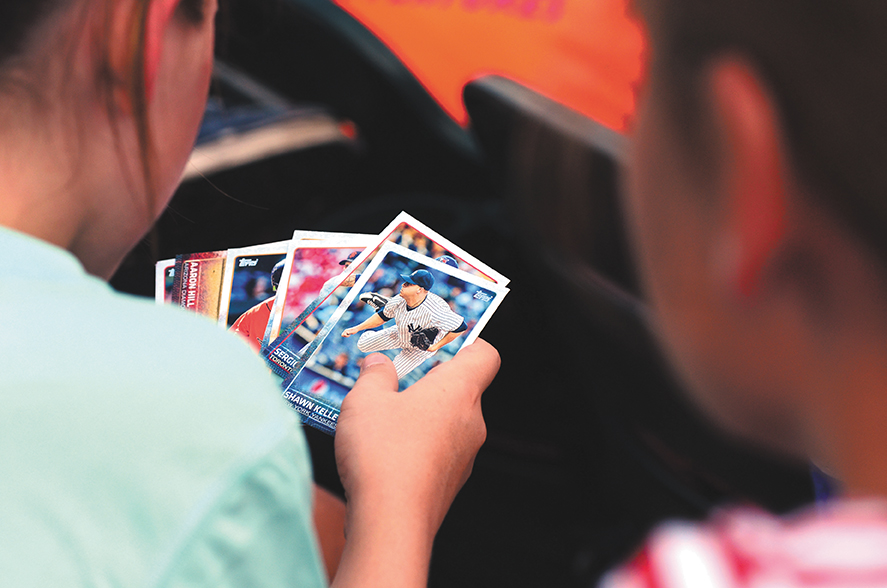 Students examine baseball cards and statistics during the game at Roger Dean Stadium in Jupiter.

Take them out to the ballgame.
Take them out with the crowd.
Buy them some peanuts and Cracker Jacks, and they’ll learn about statistics, a little geometry, and why Babe Ruth is still considered the greatest baseball player of all time.
At the Gulf Stream School, baseball isn’t just America’s national pastime; it’s how some teachers make numbers fun, history exciting and an annual trip to a spring training game a visual aid.
“No one is ever sick on this day,” Dave Winans boasted, seated in the stands at Roger Dean Stadium one sunny March afternoon as the Miami Marlins and St. Louis Cardinals played their first official training game of the season.
Filling the rows before him, Winans’ entire fifth-grade English class cheered, pondered autographed baseballs and feasted on the kind of treats that make nutritionists shudder.
Some were passionate about the game. Some were passionate about the hot dogs. None had been passionate about baseball longer than their teacher.
Winans came to the school in 1982. He was 24 then, a Rhode Island native and so, of course, a Red Sox fan. In those days, he taught both English and American history and worked a little baseball into the lesson plans.
And then a problem arose.
The sixth-graders went to St. Augustine for their end-of-year trip. The seventh-graders went kayaking in the Everglades. The graduating eighth-graders went to Washington, D.C. The fifth-graders needed a field trip, so Winans stepped up to the plate.
“How about if we take them to a baseball game?” he suggested.
“Is there any way to make it educational?” the Head of School asked.
“Well,” Winans said, “they could learn the national anthem…”
Over the ensuing three decades, the idea has grown into a Gulf Stream School tradition.
Winans’ students learn Casey at the Bat. They learn that baseball evolved from two English games called cricket and rounders. They learn about the Negro Leagues and Jackie Robinson, the first black player in Major League Baseball. They hear Abbott and Costello’s fabled “Who’s On First” routine and Yogi Berra’s delightfully sensible non sequiturs.
Several years ago, math teachers Larry Handler and Bryan Cook joined Winans’ teaching team. Now students learn the math of batting averages and baseball’s geometric shapes.
And then they climb aboard a bus and spend an afternoon watching the pros.
But first they play a game of their own. 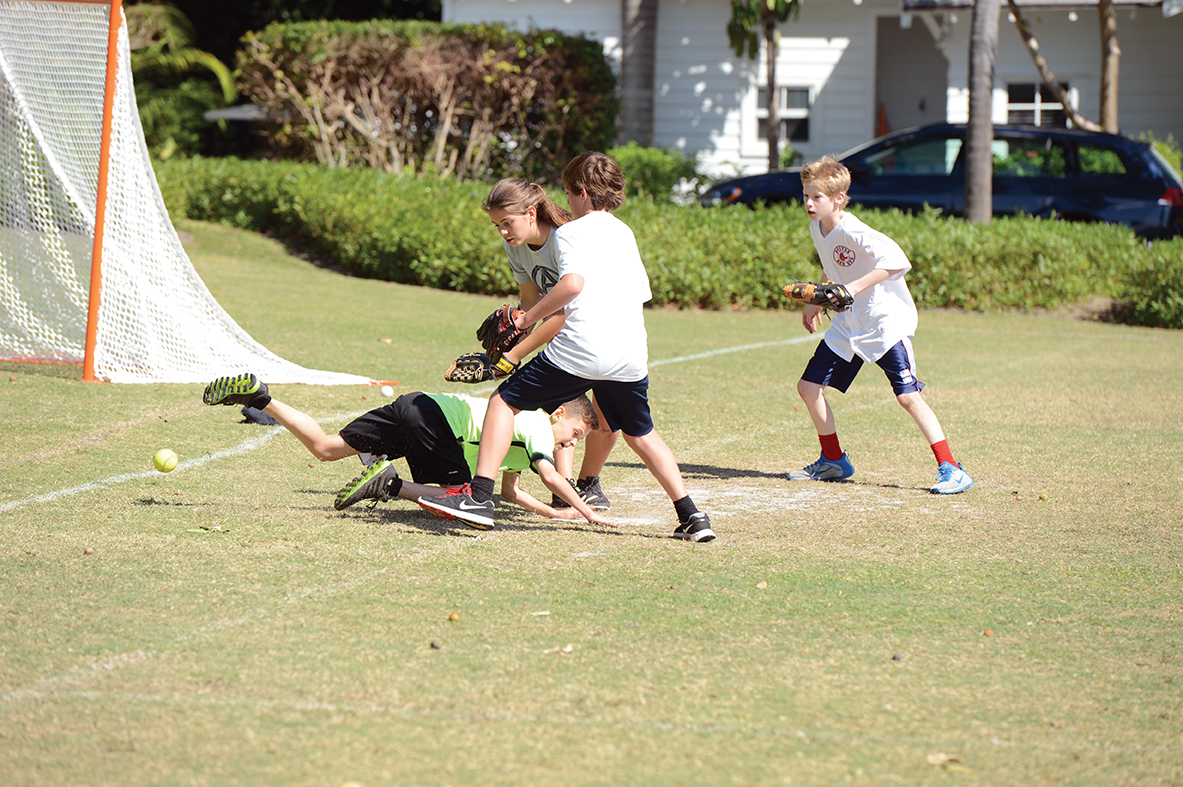 Gulf Stream School students face a pileup at third base during a softball game at the school. 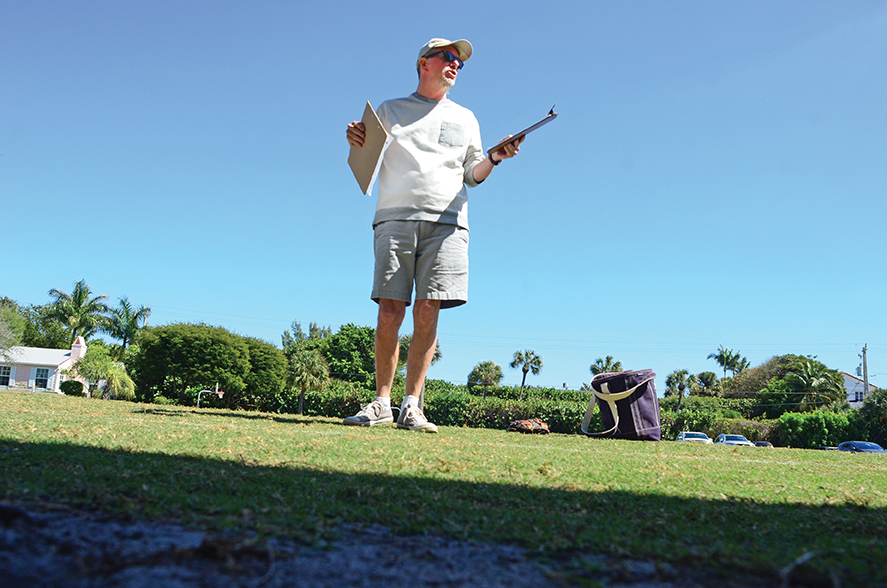 in class and outside during a softball game at the school.

On Feb. 26, a week before their trip to Roger Dean Stadium, Winans’ fifth-grade boys and girls gathered on the school’s playing field and split into four teams.
The Barracudas and Vipers would play on the north field, the Neanderthals and Bongo Boarders on the south.
Actually, Winans’ class numbers 25, so each team had six players, except the Bongo Boarders with seven. This was deemed a mathematical necessity, not an unfair advantage.
Science teacher Rick Craig pitched softballs to the Neanderthal/Bongos and Winans to the Barracuda/Vipers. Underhand.
In between their turns at bat, the players discussed what they’d learned in class.
“In baseball, there’s a lot of geometric shapes,” said Andrew Dagher, 11, of Ocean Ridge. “Like, the field is a diamond.”
Marc Bonutti of Manalapan overheard him.
“Even though it’s really a square,” he said.
Andrew wore a Red Sox T-shirt and Marc a Cardinals jersey with “10” on the back.
“I’m a Cardinals fan and I don’t have a shirt that says Barracudas,” Andrew said. “And I’m No. 10 because I’m 10.”
By the end of the second inning, the Barracudas were leading 6-1. By the end of the third, 8-1.
“We learned quotes from Ty Cobb,” reported Tori Wheat, 11, of Delray Beach.
Not quite. They learned what famed sportswriter Arthur Baer once said about Cobb: “He’d climb a mountain to punch an echo.”
Fourth inning, Barracudas, 12; Vipers, 4.
Ethan Scala, 11, of Boynton Beach now knows just how many stitches there are in a baseball.
“Two hundred sixteen.”
Fifth inning: Barracudas, 12; Vipers, 5.
They learned all this and, for some, the agony of defeat. 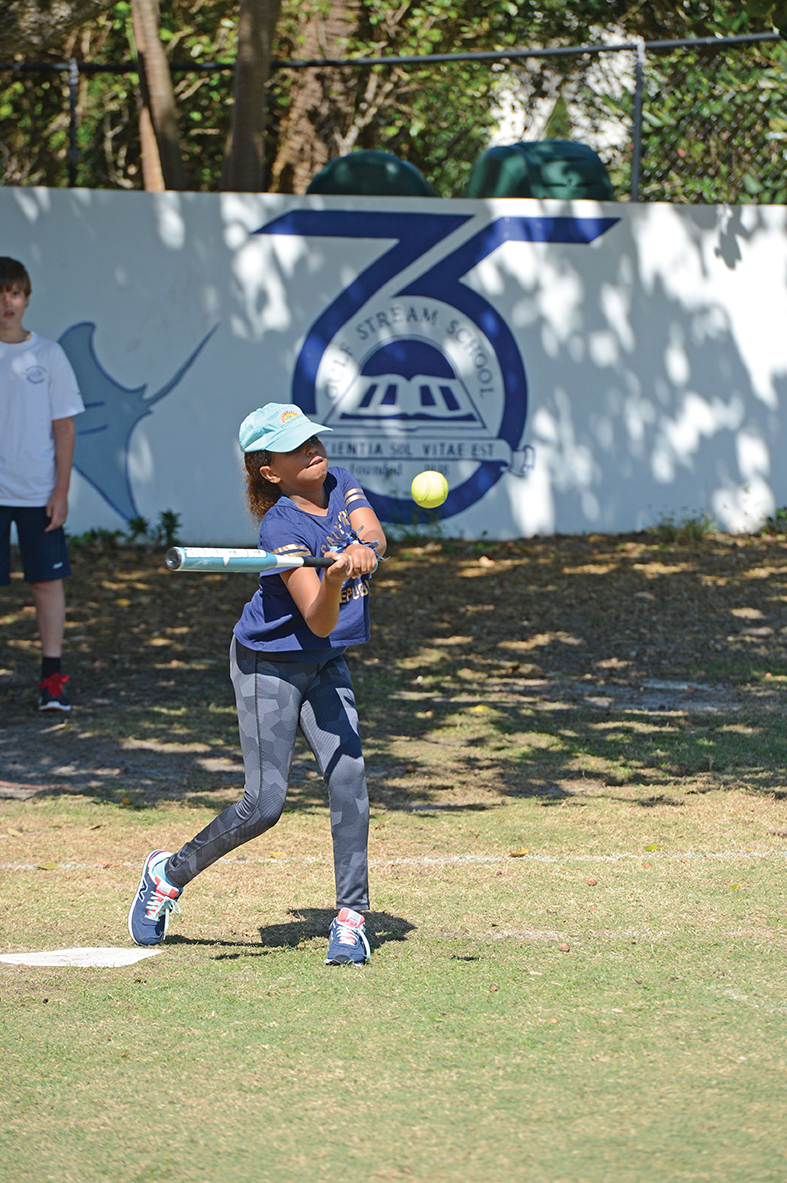 Alivia Roth hit the ball her fourth time up to score a run.

In January, Alivia Roth, 10, of Gulf Stream was one of only 300 students in the state chosen out of 8,000 applicants to sing at the Florida Music Educators Conference in Tampa. But by the fifth inning she’d struck out three times.
“I’d pay a million dollars just to hit it once,” she vowed, downhearted. “Well, maybe not a million, but … I’m never going to hit it.”
And then she did. Not out of the park, and it rolled a bit, but far enough and fumbled enough for her to make first base. And then, as other batters got hits, second, then third, and home.
“I’m surprised and shocked,” she said through a wide smile. “I actually got a home run!”
Well, no. Not really. Some of the kids haven’t learned the difference between a home run and running home, and today no one’s going to tell her.
Final Score: Barracudas, 13; Vipers, 12.
The game was called because of sunshine. And the last bell.
“Nice comeback, Vipers,” Winans told the departing teams. “Down by six and in the last inning you came back.
“Nobody got hurt and we had some fun.”

The game hasn’t even started yet at Roger Dean Stadium, and already the students are learning another important baseball lesson: Ballplayers scribble illegibly.
Dorothea Zarcadoolas, 11, of Ocean Ridge, is very proud of the ball she’s just had autographed, but she has no idea who signed it. He was number 81, though. Or maybe 18?
Alivia Roth is still beaming from her run a week ago.
“I feel good,” she said. “All the food you think is at a baseball game there actually is. It’s a big amount to eat but I don’t eat a lot because I’m a vegetarian.”
So far today she’s had a hot dog and Cracker Jacks. “And I’m going to have nachos,” she promised.
Ethan Scala, who knows there are 216 stitches in the ball, is enjoying a box of Sour Patch Kids while his ice cream melts in the cup.
“Math is OK,” he observed, “but it’s not super, super fun.”
Will the lessons he learned in class help him enjoy today’s game more?
Ethan considered. “It’ll help me understand it more,” he decided, “but not enjoy it more.”
And Marc Bonutti, Cardinals fan No. 10, has a prime seat in the front row.
The Cardinals will win today, 7-4, he predicts with confidence.
“I feel good because I know the Cardinals are good right now,” he said.
“And the Marlins never win,” added his pal, Andrew Juliano, 11, of Delray Beach.
Now Bruce Springsteen fades from the loudspeakers, the game announcer welcomes the crowd and a young woman named Debbie White sings a very professional rendition of the national anthem.
Play ball!
Dee Gordon, No. 9 and the first Marlins player at bat steps to the plate, swings — and Joseph Ghostine, 11, of Boynton Beach, suffers a food-related, near-death experience.
Gordon’s foul ball flies over the baseline netting, soars above the Gulf Stream students and strikes the counter of a food concession behind the stands.
Joseph returned to his seat with that ball.
“I was at that steak and cheese place, getting my steak and cheese dog, and it hit the counter so they gave me the ball,” he said. “I didn’t catch it, but it nearly killed me.”
To be honest, having the ball is fine, but he seems more impressed by his brush with death.
“Well,” Joseph agreed, “it’s a story to tell.”
By the third inning, the Cardinals were leading, 3-1, and Dorothea Zarcadoolas had consumed a hot dog, some Dippin’ Dots ice cream, half a lemonade, half a pretzel and was starting in on a cup of blue raspberry Italian ice.
“We learned all about how to use a scorecard and figure out batting averages,” she said.
How do you figure out batting averages?
“Oh,” she confided, “it’s very complicated.”
(You divide the player’s hits by his number of times at bat.)
In the end, the Cardinals won, 4-3, but the Gulf Stream students weren’t there to see their triumph. Baseball has nine innings, but school has dismissal bells, so they left in the middle of the sixth to be back by 4 p.m., filled with hot dogs, ice cream, Cracker Jacks — and a greater appreciation of the game.
“I knew nothing about baseball,” said Heidi Schneider, 10, of Gulf Stream, “and now I know everything about it.” Andrew Dagher invokes the spirit of Babe Ruth before getting a single.

Here are some of the baseball-related questions teachers at the Gulf Stream School present to their students:

2. What does it mean if a ballplayer has a batting average of .300 or better?

3. Why is Babe Ruth considered the “greatest player ever”?

4. Name three spots in which you can find circles on a baseball field.

5. Why should the baseball diamond really be called a square?

6. An example of a cylinder found at most ballparks is the foul pole. If a ball strikes the foul pole above the top of the outfield wall, what ruling does the umpire make?

Answers:
1. Jackie Robinson, the first African-American player in major league baseball, promised he would not fight back against players taunting or trying to hurt him.

2. A player with a .300 batting average is considered a premier player, i.e. a better than average hitter.

4. The pitcher’s mound, the on-deck circle and the cross section of a baseball.

6. He rules the hit a home run. The foul pole should be called the fair pole.