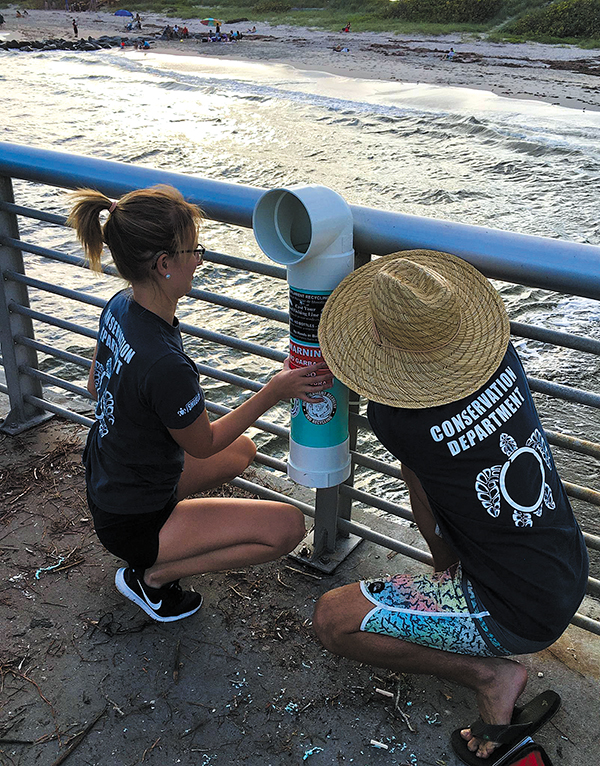 Sea turtles nested on South County beaches in mostly record numbers in 2017.
“We had a record-breaking year, and so did many other beaches along the east coast of Florida,” turtle monitor Jackie Kingston told the Gulf Stream Town Commission on Nov. 9, nine days after nesting season ended.
Gulf Stream proper had 806 sea turtle nests from March 1 to Oct. 31, said Kingston, who monitors the beaches from about Woolbright Road to George Bush Boulevard. Her 3-mile stretch counted 1,077 nests.
“This is a great beach for sea turtle nesting. It’s very high-density, the majority of it is private, the homeowners do a great job of shielding the lights during nesting season, and it’s really a prime location,” Kingston said.
Highland Beach, also with 3 miles of sand, reported even better results. Barbara James said her monitors recorded 3,721 exits from the ocean with 1,829, or 49 percent, resulting in nests.
“It’s a large number for a short beach,” James said.
Curiously, James said, a “huge number” of loggerheads crawled up on the sand in July but did not dig nests.
If they had, their eggs would have been hatching about the same time as Hurricane Irma struck in early September.
“Maybe they know about the hurricanes two months in advance,” James said.
Boca Raton logged 1,072 nests, up from 785 in the previous year but below the record 1,178 posted in 2013. Green turtles dug 300 nests (up from 38 in 2016), leatherbacks only five (down from 18) and loggerheads 767 (up from 729). The city has 5 miles of beaches.
Monitors in South Palm Beach recorded approximately 380 nests.
Kingston, the Gulf Stream monitor, also heads a nonprofit group, Sea Turtle Adventures, that brought a program called the Responsible Pier Initiative to the Boynton Inlet on Nov. 18.
Volunteers installed collection canisters for used fishing line in Ocean Inlet Park and put up signs telling fishermen what to do and whom to call if they accidentally catch a sea turtle. The canisters will be emptied regularly and the monofilament line recycled.
The initiative, started by the Loggerhead Marinelife Center in Juno Beach, is now at more than 50 locations and has resulted in the rescue of more than 220 sea turtles that were hooked or entangled in fishing lines, Kingston said.
“We’re really excited to bring it here to Boynton Inlet,” she said. “Thousands of people visit Ocean Inlet Park every single year, and I think it’s about time we increase the environmental visibility there and show that we’re doing the right thing for the community and the fishermen that are out there.”