Workers stand near lumber retrieved from the Lofthus that was piled on the beach for transport to the mainland. Photos provided by the John Henry Moore Collection, Broward County Historical Archives, Broward County Library

123 years after the Lofthus ran aground off Manalapan, photos that offer first clear look at ship and a glimpse at pioneer life emerge from historian’s idle curiosity

We’ve always known where to find the grave.
It rests 175 yards off Manalapan in 15 to 20 feet of water.
We’ve always known what happened: On the evening of Feb. 4, 1898, a vicious storm drove a Norwegian ship onto the coral reef.
We’ve always known what was left behind.
The crew of 16 reached shore safely in their life preservers, and a dog and cat were later rescued, but 930,000 feet of Southern pine bound for Buenos Aires was stranded on the grounded vessel.
And we’ve always known what it looked like, more or less. A single sepia photograph could be found online, faded and hazy, a copy of a copy of a copy.
The photograph is so old it looks like a ghost ship spied through dense fog. That was all the barkentine Lofthus left us to remember it by.
Until now.
On the evening of June 22, local historian Ginger Pedersen was at home, perusing the Broward County Library’s digital archives. She was merely curious, looking for nothing in particular, when she spotted a link to something called the John Henry Moore Collection.
The name meant nothing to her, but a tiny icon beside the link showed what appeared to be workmen posing before a palm tree.
That looks like a pioneer photo, Pedersen thought, and clicked. Among the small collection, she spotted a ship, a three-masted barkentine offshore, a small group of people onshore.
Oh, my God, that’s one of our shipwrecks.
Pedersen emailed the photo to Janet DeVries Naughton, a fellow historian and colleague at Palm Beach State College.
Is this the Coquimbo!!!!!
Yes, there were five exclamation points.
The Coquimbo, another Norwegian barkentine, had run aground off Boynton Beach in 1909, 11 years after the Lofthus.
Before Naughton could respond, Pedersen had zoomed in on the photo and there, perfectly legible on the bow, was a single word, Lofthus.
Among the other photos, she saw the pinewood cargo stacked on the shore, a tramway and windlass rising from the beach to the dunes, and gatherings of workmen who had loaded the pine onto the tram to be floated across Lake Worth to the mainland.
She saw a photo of the Lofthus offshore with the remains of the Oh Kim Soon, a smaller barkentine that had broken apart on the beach on Feb. 1, 1897, almost a year to the day before the Lofthus.
That ship’s hull is long gone.
Pedersen saw a sweet photo of a man holding a scrub jay in his hands while another sat atop his head. 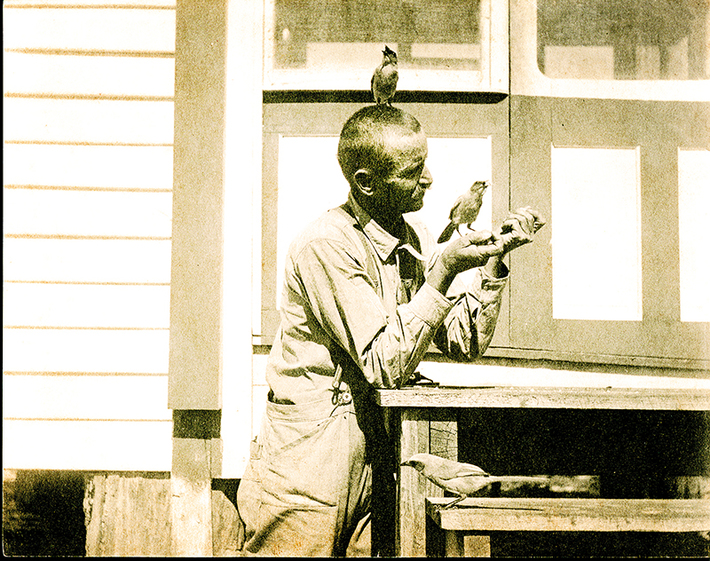 Photographer John Henry Moore holds a scrub jay at his homestead in what is now Boca Raton. The birds were plentiful in the area at the time and were easily trained.

She had discovered 12 previously unknown, misidentified photographs that show the Lofthus clearly, introduce us to the men who brought the cargo ashore, and illustrate the importance of photography in historical research. The crew of the Lofthus poses for John Henry Moore’s camera.

Built in England in 1869, the three-masted barque was first christened the Cashmere. For decades it worked the South Asia seas, sailing routes so dangerous that fake gunports had been painted on her sides to discourage Indonesian pirates.
In 1897, the Cashmere was sold to a Norwegian firm and the name changed to the Lofthus. It embarked on a new life in the Caribbean and South America, only to wreck off our coast the next year.
Along with the ship’s name, Pedersen could clearly discern those fake gunports on the port side.
The photo of this iron-hulled ship, 222 feet long with a 23-foot hold capable of bearing 930,000 feet of wood, was labeled “Sail Boat With People.”
According to the information on the link, the photos had been taken in 1899 in what is now Broward County.
All this was clearly incorrect.
But who was John Henry Moore?

On Nov. 15, 1988, a woman named Cecile Wilton wrote a letter to the Broward County Library.
“I’m delighted you desire the enclosed photos,” she wrote. “The man with the bird in his hands is my Great-Uncle Harry, altho his true name was John Henry Moore. He was a carpenter who worked on canals.”
The information accompanying the photos said Wilton lived in Terrehonne, Ohio.
Actually, she lived in Terrebonne, Oregon.
On July 8, Pedersen and Naughton met with Rochelle Pienn, the curator at the Broward County Library.
Pienne, who was not employed by the library in 1988 when the Moore collection arrived to be catalogued, brought out the original photographs from a gray, acid-free file box.
“The collection came with very little information,” Pienn explained in a recent email exchange, “and those who described it then did their best. The wonderful result, as often happens in archives, was that other scholars with more information — in this case Janet and Ginger — were able to help us make crucial identifications.”
The inaccurate link has been removed while the information is updated. 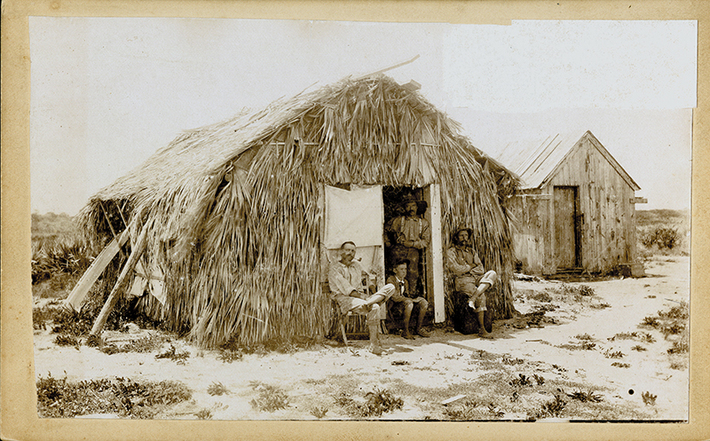 Moore (left) sits outside a palmetto hut on the beach.

John Henry Moore was born in Macoupin County, Illinois, in 1860. By 1899, he was in Boca Raton, paying $200 for 13 acres in a subdivision on which he began raising pineapples. Photos of his house are among the collection.
By Feb. 9, 1898, it was clear the Lofthus could not be refloated and so the contents were auctioned on the beach — the canned goods, hard tack, cooking utensils and guns.
The auctioneer was Major Nathan S. Boynton, whose name is now better known than John Henry Moore’s.
W.M. Brown of Titusville and L.C. Oliver of Miami paid $550 for the cargo of Southern pine, which had an estimated value of $35,000.
The man hired to get all that wood off the ship and across the dunes where it could be floated up to West Palm Beach and put on a train to Miami was Thomas Rickards, a Boca Raton pioneer and civil engineer who also sold lots for Henry M. Flagler.
Henry Moore had bought his 13 acres from Thomas Rickards.
We don’t know if Moore, the carpenter, helped build the tramway for transporting the wood. But we know he took pictures of it.
“Capt. Rickards has arranged a businesslike manner of getting the lumber off the bark,” The Tropical Sun reported on April 7, 1898. “We are told he gets off 6,000 feet a day.” The wooden tram and windlass, designed by Thomas Rickards, transferred the wrecked ship’s cargo of lumber on the beach to Lake Worth, or what we now call the Intracoastal Waterway.

We’ve known about the wreck, the wood that was auctioned on the beach and the tramway that carried it over the dunes. All this is recorded in newspaper stories preserved in local history archives. But we couldn’t see it until Ginger Pedersen chanced on a mislabeled photo collection.
“Photographs are primary resources,” Janet Naughton says. “They illustrate and illuminate the past. In this case, no eyewitnesses remain, yet the images tell a visual story of not only the shipwreck, but its recovery efforts. The coastal topography, the flora, fauna, and the pioneer determination to overcome obstacles.”
Pedersen still marvels at the find.
“These photos are not copies,” she says. “I went down to the Broward library and handled them, the original photos. A painting is all in the mind of the artist, but there’s no disputing the facts you can get from an old photo.” The salvaged lumber is ready to float along Lake Worth to West Palm Beach and Delray Beach.

On Aug. 4, 1898, a U.S. Navy tugboat began firing on the Lofthus’ hull, probably as target practice on its way to the Spanish-American war in Cuba.
A month later, 300,000 feet of wood was still in the ship’s hold, so dynamite was used to blow up the hull to free the remaining cargo. It worked, and the wood washed ashore.
In time, the wood was carried by train to Miami, where it was intended for a final home in yet another hotel Henry M. Flagler was planning in the Bahamas.
Thomas Rickards, the engineer who oversaw the cargo’s retrieval, left Boca Raton for North Carolina in 1903 after a hurricane destroyed his crops. He died in 1928.
In 1915, John Henry Moore sold his 13 acres for $400. Pedersen estimates they would be worth between $15 million and $20 million today.
By 1920, he was in Missouri, running a grocery store with his brother, and a decade later he’d moved on to Oregon, near his family. He never married and died in 1937, a half-century before Cecile Wilton, his great-niece, donated his photos to the Broward library.
Cecile Wilton died in 2006. She was 90.
On Jan. 6, 2004, the Lofthus wreck site was added to the National Register of Historic Places. It is Florida’s eighth “Underwater Archeological Preserve.”
In January 2013, a snorkeler named Steven Dennison happened upon the bow of the Coquimbo, situated in about 15 feet of water 350 yards off Ocean Ridge, apparently uncovered by the swirling waves raised by Hurricane Sandy the previous October.
When Dennison returned five months later, the sands had shifted and the Coquimbo had vanished. In the years since, the ship’s remains have occasionally been visible after passing storms stirred the sands. When Pedersen consulted the county land records, she found that John Henry Moore’s 13 acres in Boca Raton had been part of a subdivision ranging from what is now Northeast Fifth Avenue to the Intracoastal Waterway.
“I’ve got to go there,” she said.
Perhaps it was all gone now, nothing but condos and office buildings, but she was curious. Curiosity had led to his photographs, after all.
And so, on Sunday morning, Aug. 22, she found herself in Lake Wyman Park. The northern end of Moore’s former home is now at the southern end of the park.
“There are towering pine trees there,” she recalled after her visit, “not Australian pines, but Florida slash pines, maybe Dade County pine, very, very old.
“They were probably here when Henry Moore was there.” 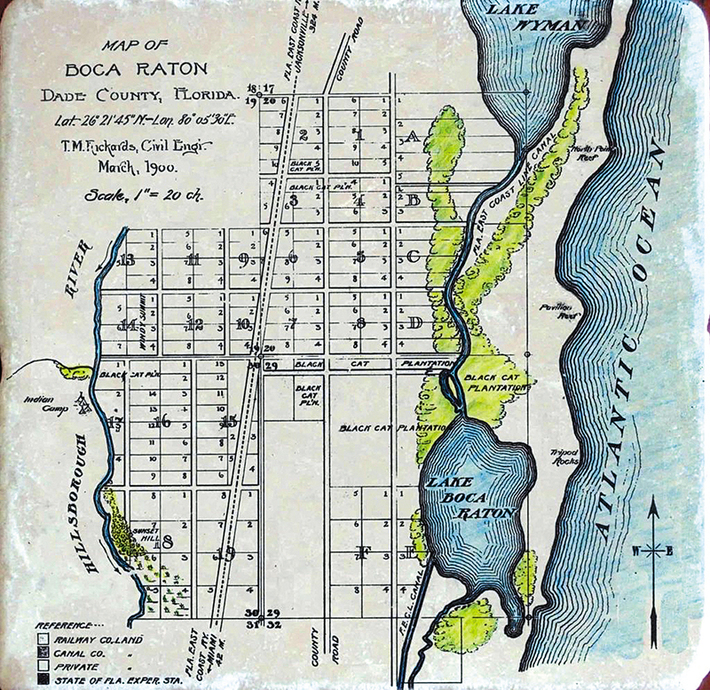 Section A, Lot 5 is believed to be his homestead. Map provided by the Boca Raton Historical Society & Museum