You’ll find them right around 6 p.m. any Thursday, eight or 10 women lining both sides of a worktable on the second floor of a warehouse on Northwest First Court in Boca Raton.
For the next hour or two, they will pick up individual servings of Kraft Macaroni & Cheese, Pop Tarts, Pringles or mixed fruit cups and place one of each in cardboard boxes.
Fruit cup after fruit cup, Pop Tart after Pop Tart, this would be awfully boring work if they were just packing boxes. But these women are at Boca Helping Hands to make sure about 700 South County elementary school students don’t go hungry every weekend.
They are the Junior League of Boca Raton, and on Sept. 23 many of their 600-plus members will gather at The Addison to celebrate 50 years of service to their community.
“We find a need, and we work to fill it,” says Jamie Sauer, the league’s president. “In the past 50 years, we’ve volunteered more than a million hours.” 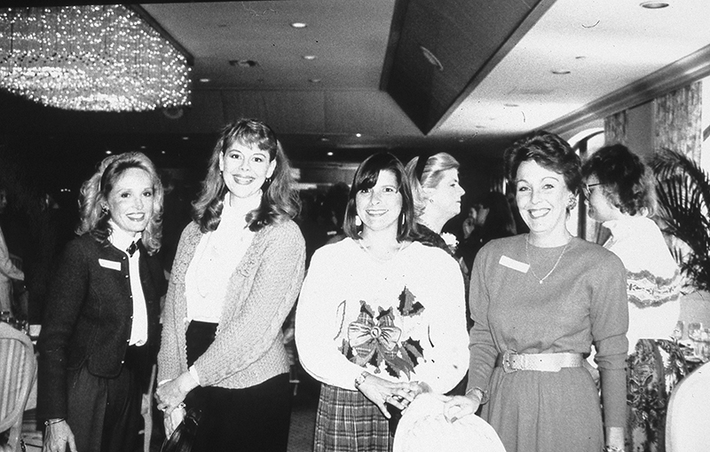 That’s a million hours of volunteerism since 1971, when 26 young women declared themselves the Junior Service League of Boca Raton and set about to gather 100 members under 35 so they could be recognized by the national organization.
Mary Lavalle joined in 1973. She’ll turn 78 in December and is still active with the league.
“It was a way of making new friends,” she recalls. “I had children, they had children. When I joined there were not so many women working outside the home. I’m a volunteer. I like to do things, and the league has taught me how to be a productive volunteer.”
By 1984, the Junior Service League had found its 100 members, been recognized by the national body, and dropped the word “Service” from its name.
They’ve never dropped the commitment to service.
In the earliest days, that meant puppet shows and consignment shops, or supporting the Morikami Museum, Planned Parenthood and Children’s Home Society.
Then they helped found the Boca Raton Historical Society and the Children’s Museum. In 2010, the league was entrusted with launching the Boca Raton Community Garden on 1½ acres by the railroad tracks on Northwest Fourth Street, land donated by the city.
Ground was broken on Earth Day 2010, with residents who leased the 100 plots agreeing to donate 10% of their fruits and vegetables to Boca Helping Hands.
A decade later, on May 10, 2021, ground was broken on a new community garden at Meadows Park on Northwest Eighth Street to accommodate the Brightline station to be built near the Downtown Library. Brightline underwrote the new garden’s construction and the city donated the land and water, but it will continue to be managed by the league.
“We’ve had a volunteer shift working together with Brightline, Kaufman Lynn Construction and the city to build the 100 garden boxes,” Sauer reports. “We’re very excited to get started in August.”
When league members learned that food stamps and the federal Women, Infants & Children program don't cover disposable diapers, they marked their 40th anniversary in 2011 by setting up the Junior League Diaper Bank.
A decade later, they’ve given away more than 5 million diapers and are currently serving about 3,000 children through 23 local nonprofits.
“On average, we distribute between 100,000 and 200,000 diapers every other month,” Sauer reports. “We’ve helped over 15,000 families in the past 10 years.”
Next year, the Diaper Bank will become an independent nonprofit. “But the Junior League will continue to be supportive, with members on the board, volunteer shifts and more,” Sauer emphasizes. “We’re eager to see what we started 10 years ago grow even more as a new nonprofit.”
And then there’s the Done-In-A-Day project, in which members volunteer to spend two to four hours at area nonprofits, such as Twin Palms Center for the Disabled, CROS Ministries, or parks and beach cleanups.
On July 23 and 24, volunteers filled backpacks with school supplies in support of the Spirit of Giving Network’s Back to School Bash.
“I was a homeroom mom,” says Jocelyn Mijares, who chairs the Done-In-A-Day committee. “Now my kids are older, so I volunteer a lot.
“My whole thought is, there but for the grace of God go I,” she says, placing another fruit cup in a box at Boca Helping Hands. “One different decision and I could be on the receiving end of these boxes.” 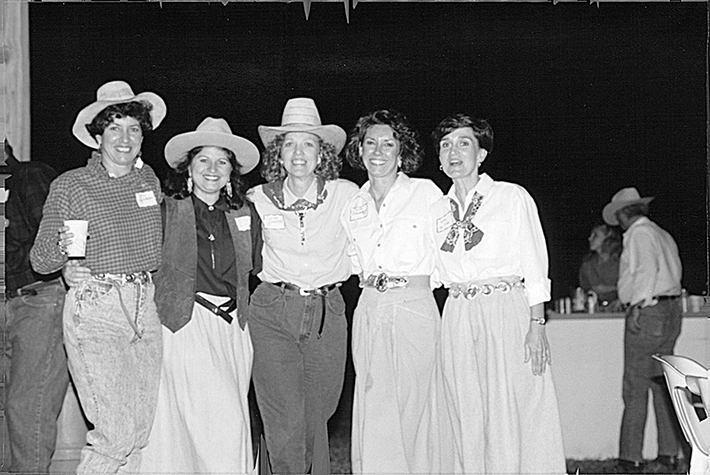 No more white gloves and pearls

And still there are some who think “Junior League” means pampered women in white gloves and pearls who lunch on lobster and make chitchat. But the cliché didn’t come out of nowhere.
The national Junior League was already 70 years old when those 26 women in Boca Raton formed their chapter.
Originally called the Junior League for the Promotion of the Settlement Movements, it was founded in 1901 by Mary Harriman Rumsey, a student at Barnard College and the sister of W. Averell Harriman, a future governor of New York, and the daughter of Edward H. Harriman, a railroad executive. She was 19.
Perhaps she wore white gloves and pearls at times — along with Eleanor Roosevelt, 19 when she joined, too — but they worked to aid poor families who had arrived in the country during the influx of European immigrants in the late 19th century.
Today, the Junior League of Boca Raton is one of 295 chapters with 125,000 members in the U.S., Canada, Mexico and the United Kingdom, and women can now join at 21.
The helping hands at Boca Helping Hands are not wearing white gloves, and they are not lazy. When the women left on June 24, they had packed 185 boxes of food.
“The Junior League has been volunteering here since 2009,” says Bill Harper, Helping Hands’ director of food and warehouse operations. “They generally pack about 200 boxes a week.”
Each box contains six small meals of macaroni and cheese, spaghetti and beef, and three snacks that provide 2,400 calories to feed poor children every weekend.
Before the pandemic, the meals went in backpacks. Now, they’re delivered in the cardboard boxes rather than repacking backpacks that, going from their homes to the schools to the Helping Hands warehouse, could carry the virus. 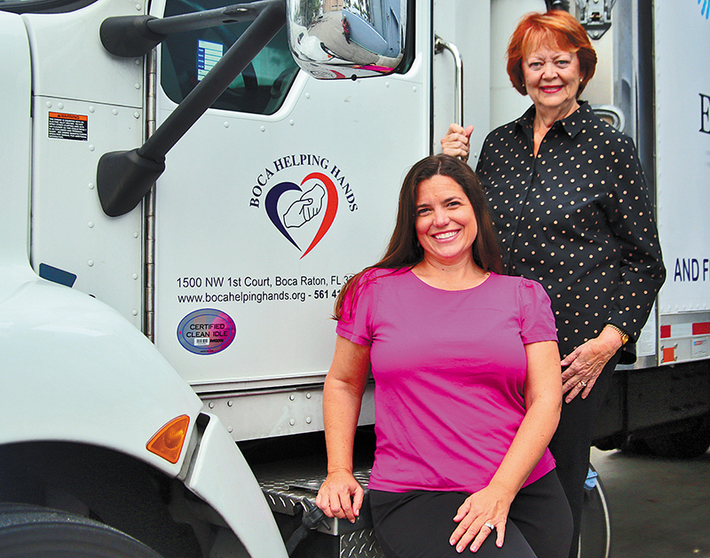 Jamie Sauer, president of the Junior League of Boca Raton, and Mary Lavalle, a president in the early 1980s, united at Boca Helping Hands with several other volunteers to pack meals for distribution to children in need. Tim Stepien/The Coastal Star

“During the school year, we feed about 700 students in six South County elementary schools,” Harper explains. “That’s 700 boxes a week in a full 38-week school year. Now we’re distributing at summer camps and Boys & Girls Clubs.”
Of the 185 boxes the women of the Junior League packed on June 24, 117 alone were scheduled to go to feed students from Boca Raton Elementary School.
For Lynne Moyer, a member of the league’s public affairs committee, this was her first stint packing food at Boca Helping Hands.
“I joined three years ago after retiring,” she said. “I was a Latin teacher. Now I play tournament croquet, but I need to do something for people in need.”
And so she found the women of the Junior League, who have done just that for 50 years.

50th anniversary celebration
The Junior League of Boca Raton will celebrate its 50 years of service to the community with a dinner, an open bar, entertainment and a silent auction.
Where: The Addison of Boca Raton, 2 E. Camino Real
When: 7 p.m. Sept. 23
Tickets: Cost is $171 per person, available at www.jlbr.org.
For more information: Call 561-620-2553 or email 50anniversary@jlbr.org.