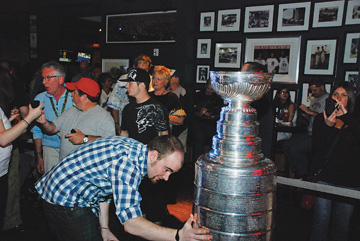 Robert Rookie, 21, of Delray Beach checks out the Stanley Cup at Boston’s on the Beach on Jan. 19. The trophy and a few Bruins (2011 champs) are on a national tour. Photo by Kurtis Boggs

Hear ye, hear ye, hear ye. Forthwith, insofar as most of January was swallowed up by political palaver, and a weary populace doth need more time than that allotted to allow our better nature to let the rhetoric, bombast and hyperbole ooze our pores, his majesty the king proclaims that the lowly month of February shall be extended to six weeks.
P.S. The king will make it up to March later, probably by shortening August, which is too hot anyway.

Oh, the curse of February. Even with a bonus day this year, we still won’t have enough time to deal with everything. From the Allianz Golf Championship through Valentine’s Day to the Boca Heart Ball and beyond, Febmar, as the new month will be known, is packed.
Not only will the Allianz Championship bring the world’s best senior golfers to Boca’s Broken Sound Club from Feb. 6-12, including local heroes Mark Calcavecchia, Bruce Fleischer, Nick Price and Bernhard Langer; defending champ Tom Lehman; and legends Tom Watson, Ben Crenshaw and Hale Irwin, but the tournament will offer something for everyone. Annika Sorenstam, arguably the greatest woman golfer in history, will host an executive women’s brunch, a private clinic and a women’s pro-am on Feb. 7.
For those who appreciate the social nature of golf, Grapes on the Green returns for the third year. If you think golfers are just into beer, think again. Wine is big, with many of the pros promoting their own labels. For a ticket ranging from a basic $85 solo to $750 for the Fuzzy Zoeller VIP package for four, patrons can sample varietals from such pros as Sorenstam, Arnold Palmer, Gary Player, Fred Couples and David Frost plus appetizers from Carmen’s Top of the Bridge, WaterColors, Max’s Harvest, Max’s Grille, Broken Sound Club, Frank & Dino’s, Assiago del Forno, Ruth’s Chris and Morton’s, among others.
As a special twist this year, the reception, a benefit for Boca Raton Regional Hospital, will overlook action on the second day from a pavilion between the driving range and the 18th green. For more info, check out www.allianzchampionship.com.
***
Speaking of bottles, the Ritz-Carlton in Manalapan is celebrating Valentine’s Day with its own version of Spin the Bottle and a dining experience that’ll offer Seven Minutes in Heaven several times over.
The lowest price for a bottle in the Ritz’s wine wall is $65, but guests taking a $65-spin may win a bottle valued up to $225, then enjoy it at dinner … either in the Temple Orange restaurant or one of the resort’s eight oceanfront cabanas.
A candlelit aphrodisiac dinner for two in the Temple Orange dining room offers tomato and buffalo mozzarella salad, beef Wellington with au gratin potato, buttered asparagus and porcini mushroom sauce, plus white and dark chocolate fondues, chocolate bark, red velvet cupcakes, cappuccino, chocolate-covered cherries and even Whoopie Pies. Price: $130 per couple or $225 with a bottle of Veuve Clicquot.
Snuggling is not only permitted but encouraged in the cabanas, where dinner begins with chilled seafood delicacies (citrus-poached shrimp, Wianno oysters, caviar and stone crab), continues with a second course of heirloom beets with Loxahatchee goat cheese, avocado and micro basil; then a dual entrée of chateaubriand and lobster with buttered asparagus and sweet potato mash. For dessert: chocolate souffle, chocolate crème brulee and chocolate molten cake, plus cappuccino. Guests can canoodle by the fire pit with after-dinner libations and simmering conversation and take home a Valentine treat for two! Personal server and champagne included — $600 per couple. Reservations, obviously, are a must.
***
If you can’t wait for Valentine’s Day for that love life boost, consider that the ancient Greeks and Egyptians — and some present-day experts — have considered garlic an aphrodisiac. So why not start the weekend before with the Delray Garlic Festival at Old School Square. The “Best Stinkin’ Party in Town” offers garlic in every shape and form, competition to crown the 2012 “Garlic Chef,” plus a little music to boot. The entertainment bill this year includes Uncle Kracker, Andy Childs, G. Love & Special Sauce, plus a Sunday full of tribute bands playing the music of Billy Joel, Bon Jovi and Journey. Admission is $10 per day and proceeds — $350,000 so far — benefit local youth education and arts organizations. To “Eat, Drink, Reek!,” go to www.dbgarlicfest.com.
*** 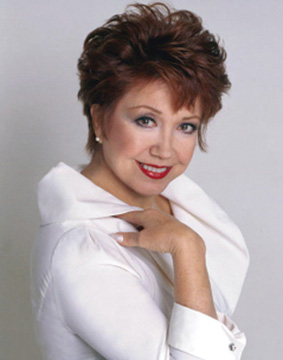 It seems only yesterday that Donna McKechnie won a best-actress Tony for her performance in A Chorus Line in 1976. Since she’s brought down the house more than a few times, it’s only fair that she open one. On Feb. 17 and 18, she’ll inaugurate the new Plaza Theatre in Manalapan, recounting her remarkable career in her one-woman show, My Musical Comedy Life. In his review of her show, New York Times critic Ben Brantley wrote: “She remains the essence of the heroic drive that A Chorus Line celebrates.”
With the Plaza, Alan Jacobson, who has mounted regional productions for two decades, is taking a shot at a permanent site in the space formerly occupied by Florida Stage. He aims to offer lower-than-average ticket prices and provide a wide range of entertainment with broad appeal.
For McKechnie’s show, opening night tickets, including post-show reception are $55; second night $39. McKechnie also will hold a master class reception prior to second show. Reservations required. (561-585-2683).
***

Another star with more than a little Broadway experience returns for a second season, albeit a little bit off the beaten track. John Davidson brings his dinner-and-a-show back for a second year, every weekend in February and March at Atlantis Country Club. The package is $48. (965-5788 or www.AtlantisDine.com).
***
The nominations are out, and the Oscars (as always) are a hot ticket. To satisfy your red carpet fix, the Palm Beach International Film Festival is again hosting Oscar Night America, the official academy sanctioned viewing party. Admission to the Feb. 26 bash in Boca’s Mizner Park Amphitheater is free.  A red carpet will be rolled out for guests, who can bring a chair or blanket to watch the telecast on a giant screen, bid for silent auction items and buy official Oscar souvenirs. Food and drink will be available for purchase. VIP tickets, $100, include choice seating, a buffet and complimentary drinks, commemorative poster and programs. (www.pbifilmfestival.org or 362-0003.)
*** 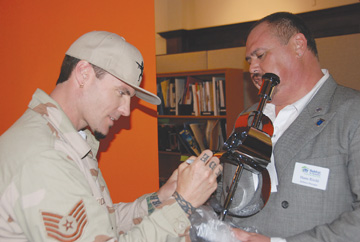 Check out the tats, the piercings, the hip-hop attire, the coolness. Cool as ice. Yet, deep down inside, Rob Van Winkle, popularly known as Vanilla Ice, is a regular guy. Oh, sure, he likes fancy cars and loves the night life, and he remains active in show business. In December he played Captain Hook in a British pantomime production of Peter Pan, but if he hadn’t knocked pop music on its derriere with Ice Ice Baby way, way back in 1989, he could very well be an automobile mechanic or a carpenter.
In fact, he is a carpenter, of sorts. In his DIY Network TV series, The Vanilla Ice Project, entering its second season, he renovates homes in Wellington, each episode dedicated to a different room in the house. Tying in with his latest project, he’s hooked up with Capitol Lighting in Boca and Habitat for Humanity for its Making Lives Brighter campaign. Through Feb. 28, anyone who donates old lighting fixtures to any Capitol store will save 10 percent on new fixtures and a tax deduction from Habitat.
“Twenty years ago I would never have dreamed this,” Van Winkle said during a recent stop at Capitol’s Boca Raton showroom to publicize the campaign. “I can’t believe it’s all happened. It amazes me. I’m blessed.
“I hope we can branch out on the show and go to other areas. I’d like to do something in Palm Beach or Boca. I have friends there.”
Van Winkle autographed a curvy chrome lamp at Capitol that will be put up for auctioned on eBay to raise money for Habitat for Humanity and to publicize the opening of its Delray Beach “re-store” at 1900 N. Federal Highway on Feb. 18.
***
Come on, all of you big strong men … and women, too!, to Lake Worth Playhouse on Feb. 19, because what once was old is new again. A coalition of local nonprofits has assembled some of the area’s top performers including Tracy Sands, Matt Turk and Rod MacDonald to perform The Music of Phil Ochs at 2 and 7 p.m.
Ochs, a prolific singer-songwriter in the ’60s in what was then called the folk era, never charted a hit, but such compositions as There But for Fortune (a hit for Joan Baez) and I Ain’t Marching Anymore became anthems for the anti-Vietnam War movement. In 1976, a depressed Ochs hanged himself, but his legacy lives thanks to documentarians such as Ken Bowser, whose film Phil Ochs: There but for Fortune premiered on PBS’s American Masters Jan. 23, and Ochs’ sister Sonny, who will narrate the concerts. For tickets, $20 and $25 in advance, $26 and $30 at the door, go to www.LakeWorthPlayhouse.org.
***
Palm Beach may be the ball capital, but Boca has its share of society galas and the season is heating up. The Building Hope Gala, Feb. 4 at The Polo Club of Boca Raton, will celebrate 30 years of work by Food for the Poor. Its goal: Raise enough money to build 100 residences and a community center and begin an animal husbandry project in Deuxieme, Haiti. Tickets: $225 (888-404-4248).
A day later at the Ritz-Carlton in Manalapan, Christopher Kennedy Lawford will speak at the annual spring luncheon for the Comprehensive Alcoholism Rehabilitation Programs. Tickets: $150-$500 (844-6400, Ext. 228).
Before all the other hospitals in South County, there was Bethesda and its foundation is celebrating its 65th anniversary at The Breakers March 3 with the “Phantom Ball,” featuring a performance by Broadway Phantom Davis Gaines and co-star Teri Bibb. Tickets: $350 (737-7733).