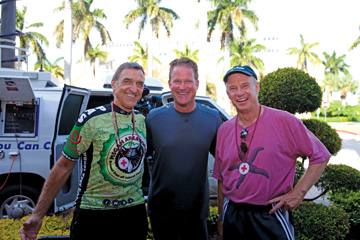 Motorists and pedestrians from Sebastian to Boca Raton had no trouble recognizing the familiar cyclist during the first week of June. Steve Weagle was at it again, biking north to south to raise awareness and money for the American Red Cross.

No easy task either for the WPTV-Channel 5 weatherman. When temperatures weren’t in the 90s, he and his occasional riding companions were being buffeted by energy-sapping headwinds and pelted by stinging rain.

“It’s amazing how many people recognize us,” Weagle said as he pedaled through Lantana on the final 25-mile leg along U.S. 1 from CityPlace in West Palm Beach to Boca’s Mizner Park.

Joined by Stan Kilbas, owner of Wheels of Wellington and who, as usual, donated the bike, Weagle covered the 25 miles in a wearying four hours, slowed significantly by rain and an unrelenting headwind.

The entourage still managed to arrive in time for the final party at ZED 451, where a couple of check presentations and an auction of Weagle’s bike brought his total for the week to an impressive $52,000. (Two bidders, Toyota-man Earl Stewart and an anonymous one, put in $12,500 for the bike.)

“We covered 130 miles,” Weagle said. “We started 10 miles farther north this year, but it was worth it. The ride doesn’t just raise money. It calls attention to the Red Cross’ work and brings in a lot of volunteers, too.”

With folks like Rush Limbaugh spending millions on his umpteenth wedding (He reserved 200 rooms for guests and paid $1.2 million just for Elton John), The Breakers is having a good year.

Other Palm Beach hotels also are doing well, too. Business at the established restaurants hasn’t returned to the heady, pre-Bernie Madoff levels of five years ago, but with the exception of Amici, which has been sold to a Monte Carlo group and will reopen in the fall as Cafe Milano, most are bearing up.
To ensure that customers keep coming in during the slow summer months, 14 restaurants from Manalapan to Palm Beach are reviving “Palm Beach Restaurant Summer.” The Ritz-Carlton’s Temple Orange and The Four Seasons Ocean Bistro are joining a dozen Palm Beach eateries to offer three-course lunch specials for $20.10 and three-course dinners for $35 through Sept. 30.

“It’s heartbreaking, but it’s what I had to do,” Amici proprietor Maurizio Ciminella said about closing after nearly 17 years. Big customers aren’t eating out as often. Hotels are adding more restaurants; you can’t blame them.”

The Breakers offers nine restaurants on and off the grounds, the newest being Top of the Point, formerly the Governor’s Club, in Phillips Point in West Palm Beach.

Delray Beach, however, hasn’t been hit so hard — far fewer Madoff victims, a less transient population, more dining variety and lower rents. Its problem may, in fact, be too many people. Not that the city wants to drive them away, but it would like to make it easier for them to drive away.

“Our restaurants are pretty solid,” Downtown Development Authority Executive Director Marjorie Ferrer said. “Our problem is that by 2 a.m. everything is closed and at 2:30 the street is packed with people. It’s almost like a sports event ending.

“In some places they turn their valet stands into taxi stands, so the people who shouldn’t be driving can find an easy ride home. We’re looking into that.”

Like Gol! and The Blue Anchor to the east, Paddy McGee’s, the first Irish Pub on Atlantic, has become a haven for soccer fans during World Cup matches, opening early to accommodate all the bleary-eyed fans. And you can bet no tears were shed when France was sent packing. Full menu. Door prizes. Drink specials, including a Harp’s 20-ounce World Cup glass that costs $8 with unlimited $3 refills during cup play.

Tucked two doors south of Atlantic on Swinton, Jimmy’s Bistro is just off the beaten path, but despite seating for about 30, it’s quickly making a name for itself. Jimmy Mills learned his trade for a decade in New York at Le Chantilly and Aureole plus a year in France, before settling in Delray late last year.

Everything is fresh and the eclectic menu — on a chalkboard — changes daily. Point of information, an 86 on the board is not the price; it means that dish is sold out. And word has it that if you want the killer three-course $25 summer special, arrive early. (Call 561-865-5774.)

When in Rome … cook as the Romans cook. That’s what is about to happen down on Ocean Avenue in Lantana, where Apicius Ristorante E Enoteca will be opening soon at what was once Il Trullo and most recently R Kitchen. The name is Italian for a Florentine-style restaurant and wine bar. It’s the brainchild of Palm Beach developer and restaurateur Leo Balestrieri.

Apicius was the first known Roman cookbook, and Balestrieri and his partner and general manager Nubar Talanian want to bring something original to South County: a wine bar with small, tapas-like plates, plus a full menu of meats, seafood and game, much of it imported from Italia, including venison, pheasant and wild boar.

For several years, Balestrieri ran Mulberry Street, a restaurant in Boone, N.C. That space is now occupied by Gol! Express, a Brazilian steakhouse, partly owned by Luciano Madeiros, who also has a share of Gol! in Delray.

The colorful Balestrieri made news of a different sort last year in West Palm Beach when he took issue with a Democratic Party activist over an anti-Rush Limbaugh moving billboard that was parked on Clematis Street.

Sounds like diners are in for an original experience.

Remember when Howard Johnson’s 28 flavors posed the ultimate indulgence for a youngster? Of course, by 2010 standards, 28 is a paltry number. The ice cream shelves at Publix take up an entire aisle. In this decade alone, the company has introduced more than 40 new products and flavors.

It makes sense that July, being one of the hottest months of the year, is National Ice Cream Month. To celebrate, the Ritz-Carlton in Manalapan is hosting Ice Cream Sundays, from noon to 5 p.m. throughout July, and on Fridays and Saturdays as well. Customers at Cool Breeze on the Resort Lawn can build their own cone with ice cream made in-house and topped with sprinkles, gummy bears, Oreos, M&Ms and, of course, a cherry on top. Price: $4 per cone.

Also on tap are snow cones, $4 for regular, or $9 for the more daring — flavored with strawberry, cherry, lemonade, lime, peach, mango, raspberry or banana vodkas.

If you build it they will come. And if they come, they’ll need places to eat. Which is why The Promenade in Boynton Beach will have two restaurants by year’s end, rising like a pair of phoenixes from the ashes, or rather the rubble, of the old shopping center that gave way to The Promenade. Margy’s, a 2,500-square-foot sit-down restaurant, and Happy Garden, 1,000 square feet of take-out, enjoyed long and productive histories before the walls came down. Let’s hope they haven’t been away too long.

Across the bridge on A1A, Wachovia Financial Center customers have been notified that the Ocean Ridge branch — across the street from Nomad Surf Shop — will be combined with the branch at Woolbright and Federal in late September. That's one less banking opportunity on the East side of the bridge.

Coming Aug. 13 and 14, it’s Tastemakers of Delray 2010. The ultimate restaurant crawl features samplings from 24 of the city’s top restaurants, paired with wine, beer or cocktails, all for the price of a “passport,” only $25. And the deal continues long after the 14th, as passport holders can continue to use them until Sept. 30 for special deals at participating restaurants.