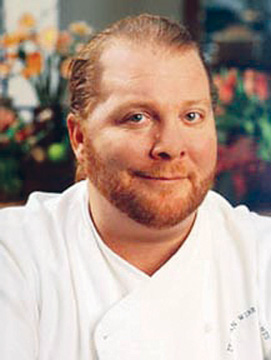 Mario Batali had logged a busy day, giving a cooking demonstration for Publix Apron’s Cooking School at The Morikami. The Food Network favorite was hungry, and he wanted someone else to do the cooking. He also wanted a place where he could relax with an old school friend who now lives in Boca.
So they motored into Delray to 32 East, where another old — and much honored — friend runs the kitchen. Only one problem: Nick Morfogen was away visiting his kids.
“We still had a good time,” 32 East owner Butch Johnson said of the Dec. 13 encounter. “Mario got there late and we had closed down, but he ate and we did the bulk of our partying with no one around. He stayed late; we enjoyed some grappa and told some stories. 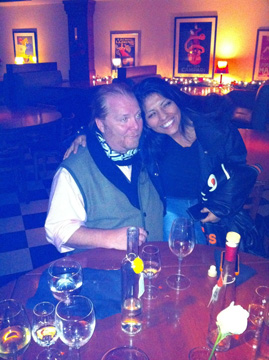 “He’s fun to be around, just like you see on TV. He’s not full of himself.”
After partying into the wee hours, Batali hightailed back to New York for a late-night appearance on Jimmy Fallon’s show. Sadly for Johnson, he didn’t mention Delray.
The Apron’s Cooking School continues Jan. 10 with the Food Network’s newest Iron Chef, Jose Garces, followed on Feb. 5 by actress and The Crabby Cook author Jessica Harper, and Feb. 20 by chef, author and Tuscan travel expert Gina Stipo. (www.publix.com/aprons).

Atlantic Avenue may be one of the hottest streets on the planet, but life isn’t all peaches and crème fraiche.  Location does not guarantee success nor does celebrity.
Within a year, two founders of “Floribbean” cuisine have now come and gone. Mark Militello’s engagement at The Office began in late ’09 and ended barely three months later when owner David Manero pink slipped him via text message.
The Office remains busy, with new menu items, new Monday-Friday happy hour, cigar menu and, for the first time, reservations.
Barely a block north in Pineapple Grove, however, Taste Gastropub is history… at least in its original form. Its lure was to be Allen Susser, another South Florida hero, but various sources claim portions were disproportionate to the prices, the menu was too “South Beachy” and/or Susser’s reputation hadn’t preceded him. Rumors have owner Robert Workens reopening with a different concept.
Other Floribbean fanciers have come and gone, but Robbin Haas, who was at Bek’s in Boca late in the last century, will join Militello, Susser, Doug Rodriguez of D. Rodriguez Cuba in Miami Beach, Oliver Saucy of Café Maxx in Pompano and Cindy Hutson of Ortanique on the Mile in Coral Gables at Boca Bacchanal in March.

Worth Avenue looked busy…
Ferragamo was packed with a special party aimed at shoe-buyers.

Graf Jewelers, too!
Valets in black caps and red jackets steered the invited social elite from their luxvees — including a very un-Ferrari-like silver and blue Ferrari — into Cartier, which for the umpteenth year teamed with a local charity for a Christmas party. This season’s beneficiary: Caron Renaissance Treatment Center: a Delray Beach-based substance-abuse treatment center whose clientele includes many who reside in 33480.
Waiters circulated with champagne, caviar crisps and stone crab salad on silver spoons. Cartier Director Clemens Ritter von Wagner and Caron’s 2011 Renaissance Gala Chairman Petra Levin made sure that everyone felt comfortable, since for five days, 10 percent of Cartier’s sales went to Caron.
But even in Palm Beach, life is not what it seems. The economic Grinch may not have stolen Christmas, but he’d furloughed some long-timers.
“Where’s Santa?” asked Arlette Gordon, a Cartier party regular, lamenting the absence for the first time in many years of “Santa to the Stars” Brady White. “It’s just not the same without him.”
Still, a good time was had by all, as a photographer caught the women trying on Cartier’s newest designs … easy hints for husbands and boyfriends.
Across the street, Ta-boo was busy, for which owner Franklyn DeMarco was grateful.
“Everyone’s in town now,” he said. “But what about after the holidays. … And in the summer. The days of being open just in the season are long gone. We need people year round. The street (Worth Avenue) is beautiful now. But I hope the $16 million (refurbishment) does some long-term good.”

Farther south, the shops along Ocean Avenue in Lantana have been given a reprieve of sorts.
Replacement of the bridge over the Intracoastal was supposed to begin in early summer, now the word is maybe early fall.
“We hear maybe 10 months,” said Dak Kerprich, owner of Pizzeria Oceana. “When it happens, it happens.”
Meanwhile, he’s been dealing with the cold weather as most of his seating is on an outdoor deck. Since the inside bar accommodates only half a dozen customers, “We had a wait,” Kerprich said with a smile as he prepped another pie. “No problem. We put a couple of tables back here in the kitchen. Of course, they had to help clean up.”

I can smell it now! The Delray Garlic Festival is just around the corner.
Everything garlic that you can imagine, including a chefs competition, 180 vendors and, yes, music, topped on Saturday night, Feb. 12, with a knock-’em dead show by Buddy Guy.
Other acts over the three days include the Dark Star Orchestra and the Fabulous Fleetwoods on Friday and regional acts Amber Leigh, Andy Childs and Outside the Box, plus Zeppelin tribute band, Led-Hed on Sunday. All for just $10 a day.