Brace yourselves. It’s April, but it seems like the season is just starting.

Savor the Avenue’s long table has barely been cleared, the last reel is still spinning at the Delray Beach Film Festival, and already the aroma of conch fritters is filling the air along Atlantic Avenue. Fritters, of course, mean that the 48th Delray Affair is upon us.

From April 9 to 11, more than 800 artists and crafters from 38 states and 16 countries will show off their talents, local vendors will offer everything from bric-a-brac to fresh vegetables, and the seemingly endless food and drink stations will be highlighted by what many believe is food from heaven: those conch fritters.

Doesn’t cost a thing to get in, which is good, because with all the good stuff on sale, your wallets still will take a beating. Organizers expect upwards of 300,000 visitors, so be patient, have fun and bring plenty of sunscreen. 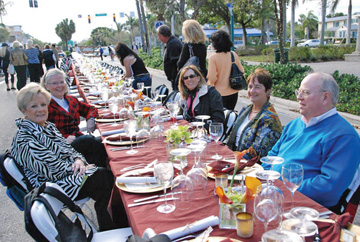 The aforementioned long table was set up on March 18 right down the centerline of Atlantic from Swinton to Fifth Avenue, with breaks only for stoplights and the railroad tracks. The diners, more than 1,000 in all (up 60 percent from last year’s inaugural) barely noticed the two noisy northbound freights as they enjoyed their prix fixe meals from 18 of Delray’s top restaurants.

Each restaurant set its own four-course menu and its own price. Santa Rita Wines provided pairings for each course. At the low end for $50, Cabana El Rey offered a nuevo Latina “fab fusion” meal of beef empanada or spicy shrimp, cabana salad or lobster bisque, churrasco (marinated skirt steak) or roasted chicken and shrimp in a garlic and wine demi-glace and flan or tres leches.

At the top, the 56 fans of La Cigale paid $85 for antipasti, jumbo Maryland crab cake or beet and goat cheese salad; veal wrapped in prosciutto in a morel mushroom reduction, or seafood paella and a mixed-fruit tart.

Most of the restaurants sold out in advance, although a few late deciders were accommodated by Gol!, the Brazilian steakhouse. A slight chill did little to dampen enthusiasm, and, in fact, to Linda Bean it was downright balmy.

“The weather’s been terrible this winter,” the lobsterwoman said of her home state of Maine (She’s L.L. Bean’s granddaughter), as she made a point of chatting up all her Perfect Lobster Roll guests. “In the places where it usually snows, it’s been rainy and muddy. A real mess. So it’s really nice to be here.”

Despite all the eatin’ in the street, most Atlantic Avenue restaurants, typical for a Thursday night, were packed with diners. That meant double duty for Larry LaValley, executive chef at Vic & Angelo’s, who recently took on the same role across the street at The Office, after owner David Manero dismissed uber-chef Mark Militello (reportedly via text message). Based on the reaction at his tables to the osso bucco Milanese and Guinness braised short ribs, LaValley did just fine. 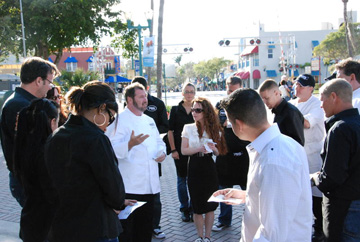 Though Taste Gastropub was still a few weeks from opening, chef Allen Susser

used the long table as a test run for his staff. Dubbed the “Ponce de Leon of New Florida Cuisine” by The New York Times, the James Beard Award winner couldn’t have been more excited as he offered last-minute instructions to his staff on the sidewalk.

“We’re excited,” said Susser, who also plies his trade at Chef Allen’s in Aventura. “We finally get to show our stuff. Delray’s such an exciting place.”

Each guest received a backpack, courtesy of Office Depot, and was urged to fill it with school supplies or food for redistribution to needy school kids through the Office Depot Foundation, which also received $5 from each meal served at Savor the Avenue. 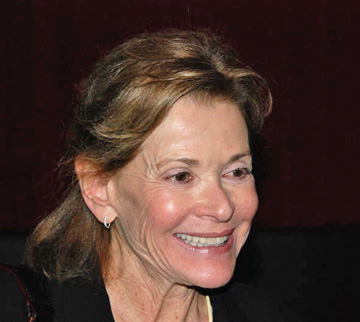 Too bad the crowd at the Movies of Delray wasn’t larger. Then again, patrons are accustomed to seeing movie stars on the screen, not in person. But in slacks, a jersey top and sneakers, Jessica Walter hardly looked the part. In some ways, she didn’t seem to feel the part either, as she hosted a special Delray Beach Film Festival screening on March 24 of her most memorable film, Play Misty for Me.

When one fan mentioned one of her earliest roles, opposite William Shatner, in the TV legal series For The People, she paused, giggled, juggled some figures in her head, and joked, “You’ve got a great memory. That was almost 50 … yes 50 … years ago.”

You name it, she’s been in it, starting with the soap opera Love of Life in 1962 when she was 21. Now, just turned 69, married to actor Ron Liebman since 1983, Walter stays busy, most recently as a voice on the animated Archer, as Tabitha Wilson on 90210 and soon to return as Lucille Bluth on Arrested Development.

Yet her iconic role remains that of Clint Eastwood’s obsessive, possessive jazz radio fan in Play Misty for Me, a portrayal that blazed the trail for Fatal Attraction and Basic Instinct.

“It was a great movie to work on,” Walter said.

“But they were all new,” one fan at the screening said. “You held it all together.”

Almost as quickly as she arrived, Walter had to leave. “If I miss my flight, my husband will never forgive me,” she yelled on the way out with festival organizer Michael Posner.

A busy man, Posner, who founded the event in 2006. He’s a veterinarian by trade, but movies are his love, and Delray, he believes, is the perfect place to hold a festival. It may also be the only film festival that includes a surfing contest and a beach cleanup. But Posner has nerve. He once invited Anthony Hopkins, who gave a “maybe.” Last year the festival honored Barry Bostwick, who’s back as the “creative chair.” Walter and Sharon Gless (Cagney & Lacey) are Lifetime Achievement Award recipients.

While on the subject of movies, Boynton Beach is offering free outdoor movies on the first Friday of each month through June at the Ocean Avenue Amphitheater. Showtime is 7 p.m. Up first, on April 2, Hairspray; May 7, Up; and June 4, The Blind Side.

After 33 years of c’est si bon in Lake Worth, L’Anjou is history. Tough financial times led to a foreclosure last year and the recent ill health of founder Gilbert Cela forced the classic French restaurant to close March 21. Should Cela’s son Marc be unable to resurrect L’Anjou, it will be remembered every time someone sees Body Heat. The restaurant’s exterior provided backdrop for a meeting between Ned Racine (William Hurt) and Matty Walker (Kathleen Turner) in the classic film noir shot in and around Lake Worth in November and December 1981.

A thank-you ad in The Palm Beach Post from the Ladd Co., which produced the film, included L’Anjou as one of the businesses “whose cooperation and patience were indispensible.”

Incidentally, the movie’s best line isn’t uttered in Lake Worth. When Walker snares Racine with, “You aren’t very smart, are you. I like that in a man,” they’re at the bandshell on Hollywood Beach, about 45 miles south.

May is National Burger Month. To celebrate, Breeze, the Ritz-Carlton’s oceanfront gourmet burger bar, will feature a different burger special each day of the month, all but one of which will come from the hotel’s chefs. But during April, recipes will be accepted from the Ritz’s Facebook community, and on April 28, hotel execs will decide which cyber-recipe makes the grade. In addition to the honor of having his or her burger spotlighted, the winner will be invited to lunch at Breeze. Burger lunches are $15. To hook up with the resort’s Facebook page, go to www.facebook.com/theritzcarltonpalmbeach.

Up the road at The Four Seasons Palm Beach, proceeds ($2.50 per glass, $10 per bottle) from sales of specially selected Chilean wines through April 18 will be donated to the Chilean Red Cross for earthquake relief.

Tags: along the avenues, column, delray beach, lake worth
E-mail me when people leave their comments –
Follow