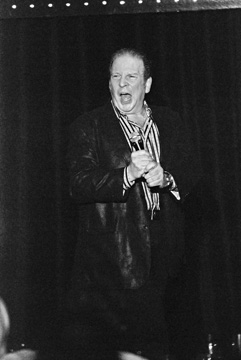 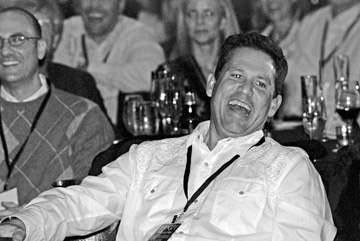 Charles Benoit (left) gets a chuckle from comedian Eddie Brill who entertained  hundreds Jan. 28 at the Delray Beach Marriott, during the 5th Annual Laugh with the Library fundraiser to benefit the Delray Beach Public Library.
Photos by Jerry Lower

After more than 2½ years of darkness and silence, the heavens are once again embracing Lake Worth: The Bamboo Room is back.
The only blues club in this county that features top regional and occasional national acts will reopen at 25 S. J St. on Feb. 17. David Shelley will open, followed on Friday by J.J. Gray from Mofro and Iko Iko and Blues Dragon wrapping up on Saturday.
“Ever since we closed, we’ve had so much good will,” owner Russ Hibbard said. “We kept the website up, and over the past year and a half we got so many e-mails. We were fortunate that we owned the property, so even though we were closed we were able to make improvements. Our old staff is back, and our intention is to keep the caliber of entertainment that we had before.” (www.bambooroomblues.com or 585-2583) 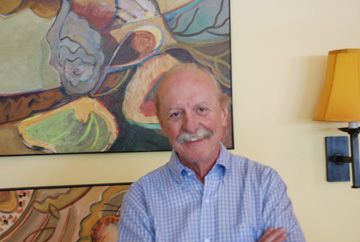 Butch Trucks is one of the many top musicians who’ve played the Bamboo Room. For nearly a half-century, Trucks has been singing and playing the blues, most notably as the drummer for the Allman Brothers Band … And he’s still around to tell about it — the highs and the lows.
On Feb. 13, he will tell some stories, some of them about the highs and the resulting lows, at the 16th annual luncheon of CARP, the Comprehensive Alcoholism Rehabilitation Programs, at the Ritz-Carlton in Manalapan. The luncheon ($150) will feature performances by singer Avery Sommers and pianist Pepe Morreale.
Trucks says he won’t pull any punches. “What I’m gonna talk about is what happens to idiots, not to idiots, but to normal people when they get deified, especially in their early ages,” Trucks said. “And why things like CARP are needed for idiots like us and for other people who can’t quite cope.
“My perspective is from that perspective: about fame and wealth coming much too fast, much too early, unexpected and then all the sycophants around you telling you how great you are.
“We used to fly around in a jet called the Starship. It had the ‘Allman Brothers Band’ written on the side of it. In the back was a bedroom with a big round bed with fur all over it, mirrors on the ceiling and all the walls and two very willing stewardesses. There was a den with a fireplace in it, and we put bean bags on the floor and that’s where everybody smoked reefer.
Some stories will be funny and some will be sad; he might even tell some about Cher, said Trucks, who’s battled his own demons. Thirty years ago, he quit drinking liquor. He continued to drink wine, but it made him aggressive and turned him into “a total jerk.”
“I finally decided eight years ago last October that if I couldn’t stop then I wouldn’t start,” he said. “That was the last sip of any alcohol I have had.”
“Talking about CARP is easy. I have never seen anything like CARP, and it’s free, and I still don’t know how they do it.

Heaven help us all.
The Palm Beach Par 3 Golf Course, recently revitalized, is being featured on the Golf Channel.
Blame the Haney Project and its host Hank Haney. In his two previous seasons, the renowned swing coach — who helped improve the game of Tiger Woods, that young duffer who has that fortress just up the beach on Jupiter Island — worked with the likes of Ray Romano and Charles Barkley. In version No. 3, which debuted Jan. 25, he really goes off the deep end: His new student is Rush Limbaugh.
Watch as the king of bombast blasts cigar smoke in his host’s face. Watch as his chip shot rebounds off a cart and almost beans him. Watch as he pontificates: “I actually think I’m too smart for the game. If you look at the people that can do this game very well, their minds are vacant.”
Limbaugh admits he never practices, as he swings away and declares, “Nothing good ever happens when you go left.” Of course, the aim in golf is to go straight; not much chance of that with Rush either. If you’re not a bum, but you’ve got a good bum and a desire to serve, then you might be just right for … Butlers in the Buff.
“The male order company” offers living party rentals — in white collar and cuffs, black bow tie and black apron (not wrap-around) — to serve drinks and hors d’oeuvres. All fully above board. Conceived in England, where more than 250 tie one (apron) on, the concept spread to Australia and has now reached the colonies with the first franchise in Florida.
Prospective butlers — and customers — should visit  www.ButlersInTheBuff.com or call (941) 309-5430.

From Atlantic Avenue to Hollywood and Vine: Former Delray Beach millionaire, socialite and politician Nick Loeb apparently has recovered sufficiently from a car crash to accompany his new squeeze, actress Sofia Vergara, to the Golden Globe awards bash on Feb. 16. Tagging along with Vergara, star of Modern Family, trust-funder Loeb, who has run unsuccessfully for Delray City Commission and Florida Senate, even managed a little face time on some of the gossipy entertainment shows. He showed no ill effects from the crash last August that put him in intensive care with a broken leg and pelvis.
Now, apparently, his intensive care comes from Vergara, although he hasn’t given up on politics. He told Access Hollywood’s Billy Bush he’s thinking about running for the U.S. Senate in 2012.

What will islanders do?
“I don’t know if I should be laughing or be scared,” Maurizio Ciminella said with an uncharacteristically muted chuckle. Ciminella just opened Amici Market on North County Road, and come spring he’ll be the only grocer in Palm Beach. That’s when Publix plans to begin rebuilding its only store in Palm Beach County east of the Intracoastal Waterway.
The new store, 50 percent larger at 44,018 square feet, will be ready no sooner than December.
“Imagine the possibilities! Maybe I’ll fill the coolers with bread, milk and eggs,” Ciminella said, noting that some Publix regulars are already checking out his market. “People are coming in and asking if we are going to be open on Sunday. And we always deliver. We’ve already delivered to Manalapan.
“They’re closing around Easter, and we’ll start opening Sundays on Easter … with the blessing of the church, of course,” he said, referring to St. Edward’s Church across the street.

For two decades JAMS, the Jazz Arts Music Society, has been about the only source for live jazz in the Palm Beaches. Its concert series at “the Harriet” in CityPlace already is into its 11th season, and pianist Marian Petrescu will headline the anniversary celebration on Feb. 22.
Should you prefer a little dinner with your jazz, head to the Four Seasons Resort, where JAMS has introduced its new Living Room Series. Take in a concert in the resort’s Living Room ($25 for JAMS members, $35 non-members) plus pre-concert three-course prix fixe dinners in either the Bistro ($35) or the Restaurant ($45). Call 582-2800 for dinner reservations, (877) 722-2820 for concert info and tickets. Next up, Feb. 7, saxman Harry Allen and his quartet.

Meanwhile, down the road in Manalapan, the Ritz-Carlton is embracing a new angle with the reopening of its signature restaurant, appropriately named Angle. Most of the fixin’s, from greens and produce to line-caught fish, comes from local farms, and boutique purveyors who support the “slow food movement.” It’s an American supper club with modest prices — starters from $10, entrees from $26. Of course, you can go all out and request a special dining experience at the Onyx Tasting Table, glowing onyx and amber, that features Far Niente Wines, chef’s plates and special Taste Makers dinners. (540-4924)

Newest Delray opening is the Atlantic Ocean Club and Buddah Sky Bar (217 E. Atlantic Ave.), just west of the tracks.  Jamie DeRosa, mostly recently at Taste Gastropub is running the kitchen, stressing fresh, local, sustainable, organic fare. DeRosa is Florida-raised but raised the level of his craft with Wolfgang Puck for five years and then at the Michelin-rated Fat Duck in London.  Open only since Jan. 24, AOC is already earning good notices, with raves about the seafood, especially the crab cakes. 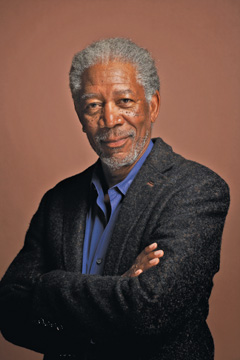 Enjoying some down time in Delray at the Seagate Hotel, actor Morgan Freeman … Semi-hometown boy Andy Roddick headlines the Delray Beach International Tennis Championships, Feb. 18-27, and John McEnroe once again will play a few games in the middle of Atlantic Avenue. Big Mac’s opponent will be Swede Mats Wilander for the “Grand Slam grudge match” at 5:30 p.m. on Feb. 18. No charge.