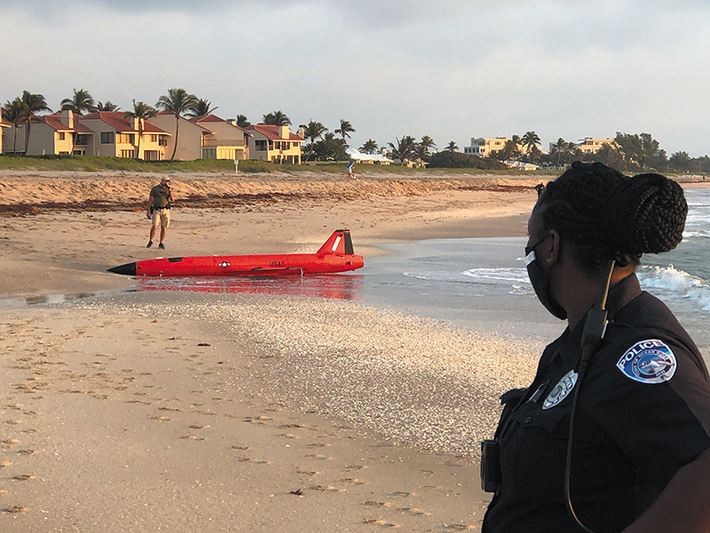 Ocean Ridge Police Officer LeQuandra Beckford was one of the first responders on the scene after a 20-foot-long Air Force practice drone washed ashore. Moments after this photo was taken, the beach was evacuated until the drone was determined not to have live ammunition. By afternoon, it had been removed from the beach, waiting for the Air Force to pick it up.
According to The Air Force Times, the 53rd Weapons Evaluation Group flew the target drone from Tyndall Air Force Base near Panama City over the military’s testing ranges in the Gulf of Mexico. That means it was likely carried by the Gulf Stream about 500 miles from where fighter jets shot it down, around the southern tip of Florida, and up to its final resting spot. Its journey may have lasted two or three months.
First Lt. Savanah Bray, Air Force 53rd Wing spokeswoman, said: ‘Sometimes, like in this instance, weather, waves or other circumstances prevent our boats from being able to recover the drones, and they can wash up on shore. The situation isn’t dangerous nor entirely uncommon.‘
Jerry Lower/The Coastal Star