Jeremiah Decius had just joined Streetwaves, a nonprofit group that teaches kids how to swim and surf, and already he was in trouble.

He was accused of hitting a girl in the group and was asked to leave. But his return after an 18-week absence and progress since then mark one of the group’s success stories.

“It was heartbreaking for me to do that,” Streetwaves founder Maurice “Maui” Goodbeer said of the dismissal. “But it was my hope and prayer that he would return.”

Goodbeer started Streetwaves as an answer to the murder of his younger brother, Melvyn Patterson, in San Diego in 2003. Patterson, 21, was shot to death by a 16-year-old gang member.

Goodbeer couldn’t bring back his brother, but he made a promise when he delivered his brother’s eulogy that he would do something to save inner-city youths from getting involved in gun violence.

Goodbeer, who lives in Delray Beach with his wife and two young daughters, began surfing as a boy. He is convinced that the ocean can change the way youngsters interact with their environment.

Ten years ago, while surfing, he decided that he would honor his promise by sharing his love of the ocean with children.

In Miami, he added a surfing program at Alonzo Mourning’s Overtown Youth Center and learned how to start a nonprofit. In Broward County, Deerfield Beach Middle School students learn to swim and surf in a daily program supported by private donors and grants. The Streetwaves kids have also visited the International Swimming Hall of Fame in Fort Lauderdale.

They're keeping up their skills during a Streetwaves summer camp that runs through Aug. 10. The program is supported by private donors. Over 10 years, Streetwaves has taught more than 3,000 children to swim and surf, and now has a staff of 15.

Next stop: Delray Beach, where Goodbeer plans to start a free Saturday surfing program starting Sept. 1, on the heels of Streetwaves’ 10th anniversary celebration Aug. 31 in Delray.  He is seeking financial support from community groups and the city.

Goodbeer and his brother were both born on Aug. 31. “We were extremely close,” recalled Goodbeer. “He was mine, as far as I was concerned. I took him to the beach with me all the time. We were each other’s guardian angels.”

Many of his students have never been to a beach before.

“At first they have some apprehensions about the water,” said Goodbeer.

Apprehensions are gone now, as the kids pile out of the Streetwaves van, zip into wetsuits, dash into the surf and paddle out to find waves.

The van is a converted SWAT vehicle now filled with youngsters and surfboards instead of police and automatic weapons.

Like the others in Streetwaves, Guerdy Laurent, 12, a seventh-grader at Deerfield Beach Middle School, learned swimming first, then practiced surfing techniques on the sand before he was ready for the water.

“Just watching Coach Maui helps me a lot,” he said.

The students have to prove they are strong swimmers before they start surfing, and 10 of the current group learned well enough to be invited to join swim teams.

What if they had to choose between swim team and surfing?

“Surfing!” they all shouted in a chorus.

Maya Hodges, 12, of Pompano Beach, is working on popups, going from prone on the board to standing up.

“She has a great popup,” said  Goodbeer. “She’s growing into a style that works for her.”

Every time one of his students pops up and rides a wave to shore, Goodbeer is exhilarated.

“I don’t know right away if a kid is going to be good until they have built up their strength — arms, legs, lungs — and learned the strokes,” Goodbeer said. “But I’ve been unbelievably impressed.”

Besides learning how to swim and enjoy the ocean, Streetwaves participants become more environmentally aware, including learning to recycle and clean up beaches.

“There’s something special about befriending people in the water,” said Goodbeer. “It happens so organically and beautiful. You have each other’s back. I watch the surfers show so much respect for these new surfers. And I think wow, these kids are learning a lot.” 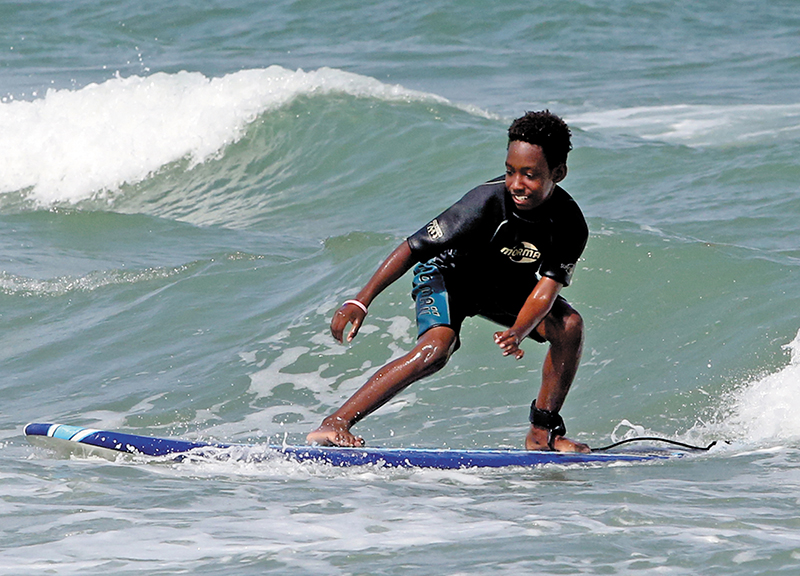 Jeremiah Decius’ absence seemed like an eternity. Then he and Goodbeer worked out a plan for his return.

A wiry 12-year-old, Decius showed promise. From being a novice swimmer at best, he had learned to swim 1,000 yards. He had learned how to pop up onto a surfboard from the water, turn, paddle, walk and stand on the board. But “he had a little bit of an attitude,” Goodbeer said.

Later Goodbeer learned where that attitude may have come from. Because of school schedules, many of the kids had not eaten since their lunch at 9:45 a.m. After that, he made sure to bring fruit and snacks for them to eat before surfing.

He also found out that Decius’ alternative for the afternoon was to walk home to an empty house.

“I thought, why not come back, because I was bored and alone when I got home,” said Decius, who lives in Pompano Beach. So Decius returned in time for the last nine-week after-school surfing session and joined the summer program.

“I see a great change in him,” Goodbeer said. “He’s surfing great, he’s happy, he’s like a different person. I am so proud of him, I’m in tears right now.”

Streetwaves is looking for a venue to show a short film about the group. It also needs surfers and others to volunteer. For more info on its planned Delray Beach program and anniversary celebration , visit the Streetwaves page on Facebook or contact maui@streetwaves.org.