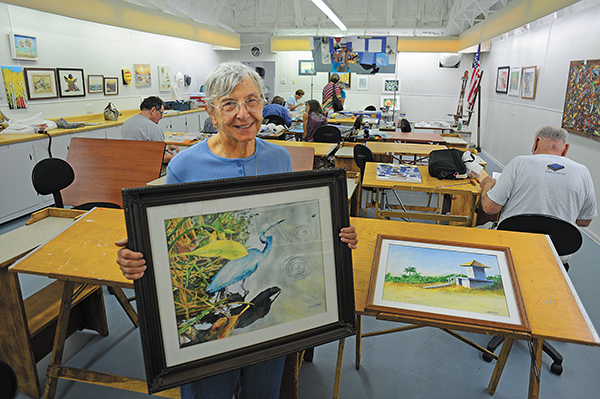 Marie Soltis at the Briny Art League studio with her painting of a blue heron at Wakodahatchee Wetlands. 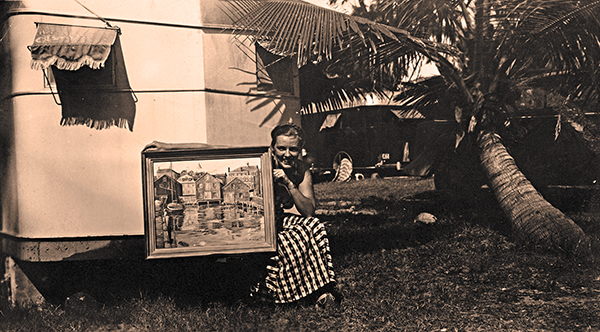 Artist Louise O’Brian holds one of her paintings outside her Briny Breezes mobile home in the 1940s. Photo provided

Quiet, please. Artists at work.
The men and women in Pat Columbus’ mixed-media class at the Briny Breezes Art League are bent over desks, gently working their canvases, so Marie Soltis speaks softly.
“When I first saw everything that went on,” she recalls, “it was like an art colony to me. Most everybody here is highly motivated. They don’t want to just sit around.”
Soltis is a former art director at the Culinary Institute of America in Hyde Park, N.Y., who taught watercolor painting here for seven years, until failing vision forced her to stop.
She is 82 now. When the Briny Breezes Art League was born, she was 15.
That was 1950, when this tiny town of mobile homes was still a seasonal campground. Roland Stebbins, the retired head of the University of Wisconsin’s art department, started teaching about 20 aspiring amateurs in a storage building where the local beauty parlor stands today.
Two years later, the group held its first art show, a casual celebration of its efforts. A year later, the classes moved to an old cottage, which served until 1967, when the current swimming pool was installed. For the past 40 years, the league has met in a Quonset hut behind the beauty parlor. 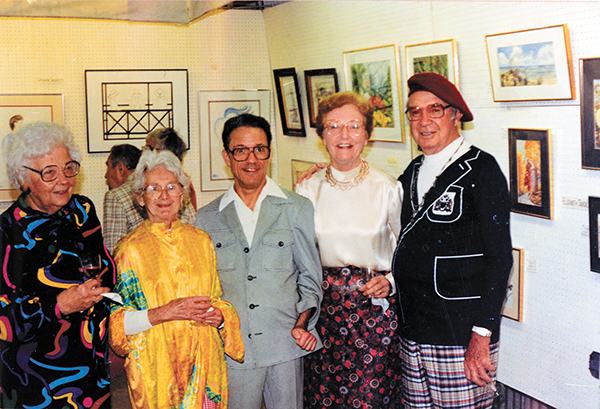 The studios have come and gone, the students and teachers have come and gone, but the art shows endure.
On March 18-19, the 65th annual Briny Breezes Art League Show will display the members’ work in the town’s community center and art studio. Some paintings will touch you with their sincerity; some will dazzle you with their mastery.
Marion Roddin joined the league in 1990, enrolling in a watercolor class to fulfill a childhood dream. Twenty-seven years later, she’s still painting.
“I don’t want to brag,” says Roddin, 79, who summers on Long Island, “but I charge a lot, $50 to $200. And in New York I get more. I sold in East Hampton this year. I have doctors.”
Which may sound a bit like bragging, until she leads you along the wall to Five Parrots, a lusciously bright portrait of five orange birds posed against a gloriously green background.
“I matted and framed it myself, too,” Roddin adds, and yes, you think, those parrots could indeed sell for $200.
If they do, it might not be the first time.
Along with 65 annual art shows, the league has also acquired a legend.
Back in those early days, the story goes, one lady’s loving husband secretly bought her painting for $20, added a zero, returned it to the exhibit — and the painting immediately sold for $200.
No one alive today can prove this did not happen. And so the story goes. And goes.
Over the years, the league’s ambition expanded. From January to March, classes are now offered in mixed media, acrylics, pastels, collage and oils.
When Mildred Miller, a retired fashion designer and illustrator, began teaching oil and acrylic painting in the mid-1950s, her lessons were free. Today, students pay $50 for four weekly classes of about two hours each.
One artist whose work you won’t see at any price is Sandy Dietzel, 69, who signed up in 2013.
“Nope,” she says, adamantly. “I’m not good enough.”
She’s laboring over a mixed-media work, a Halloween cat mask taped to a canvas and covered in papier-maché for painting.
“I joined to meet new people. I just wanted to try it,” she explains, “and what I’ve learned is how hard it is. I force myself to look at details more now. When you look at a flower, you don’t notice all of it.” 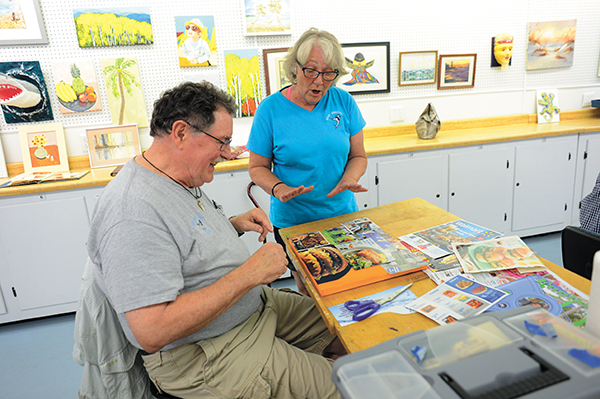 Students arrive for their first class expecting to learn how to paint. Pat Columbus teaches them how to see.
“If you want to do a cloud,” says Columbus, 66, a graduate of the Ontario College of Art who has taught acrylics and mixed media since 2013, “look at a cloud.”
Here’s a silver teapot on a red tablecloth, she tells them. What color is the teapot? Black, white and gray, the students decide.
“But they don’t notice the red cloth reflecting in the silver teapot,” Columbus says. “Most people can paint. It’s teaching them how to look at light and dark and the contrasts and combinations of colors.”
As Columbus’ students huddle at their desks, a lone painter stands at an easel in the back of the room, dabbing at a small, 8-by-10 canvas.
“I’m a dabbler,” says Michael Coppola, 56, who sells real estate up in Portsmouth, N.H., and dabbles when visiting his parents down here.
Today the dabbler is dabbling at a swirl of whites and blues with a touch of green and red that might be a sky.
“It’s probably going to be a landscape,” he says. “I do two or three at a time because the oils take so long to dry.”
Sometimes he gives his work away, sometimes he sells.
“I paint for the fun of it,” he says. “What I’ve learned is that when you think you’re done, you were usually done 10 minutes ago.”
Beginners, intermediates and advanced, for 67 years residents of the campground that became a mobile home park and then a town have joined the art league to learn the art of painting. Along the way, they’ve learned the art of friendship, too.
Mildred Miller taught oil and acrylics from the 1950s until her death in 1997.
Now her daughter, Janice Vizino, teaches watercolors. 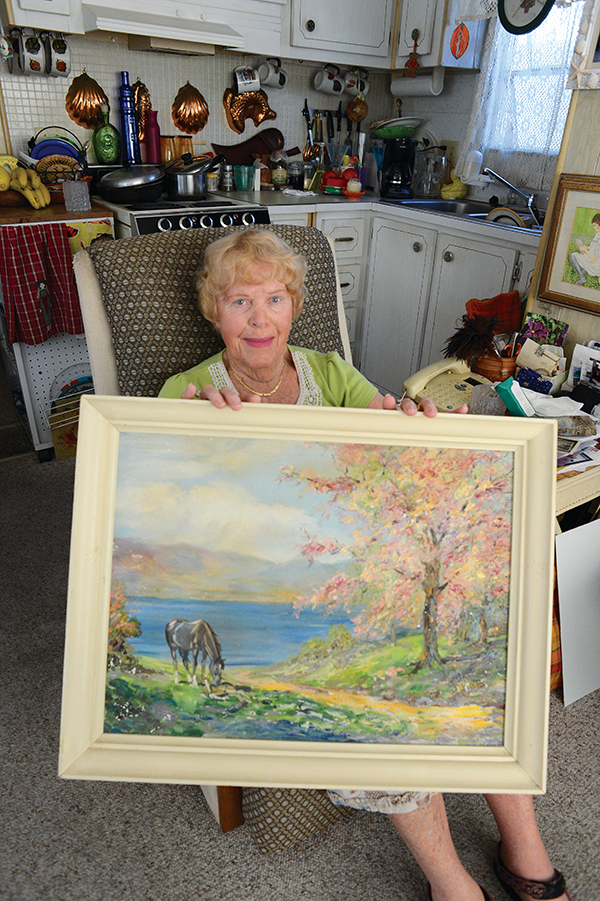 Janice Vizino holds a painting by her mother, Mildred Miller, who taught 60 years ago.

“You wouldn’t believe the friendships,” says Vizino, 86. “People become very close. I had a heart attack Thanksgiving week and people were here every day, bringing me hot meals. The club means as much to me for the friendship as the artwork.”
Vizino’s home is adorned with her work, new and old. Dolphins leaping, an array of endangered species, tigers, turtles and birds. A vase.
Her mother taught 60 years ago, and now she teaches.
“Painting is very restful to me,” she says. “I put on some nice quiet music and I paint for hours. I’ll work from about 10 a.m. until lunch, and then I’ll paint some more.”
And what, you ask, have all those years of painting, all those classes, all those canvases taught her?
She doesn’t hesitate for a second.
“Patience.”