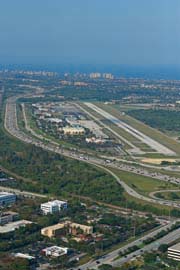 The view of Boca Raton Airport from Glades Road and Interstate 95. 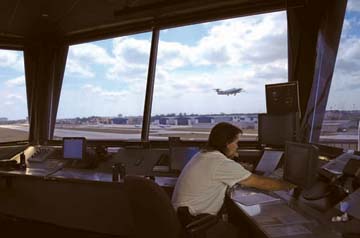 The federal government pays to staff the control tower at the Boca Raton Airport. 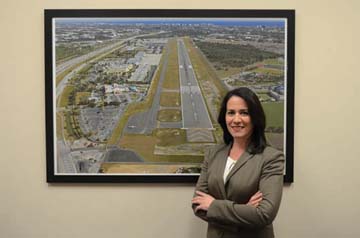 came to the airport after more than 20 years with Fort Lauderdale Executive Airport.

It is an oasis on more than 212 acres of prime real estate in the heart of Boca Raton.

It is an economic-development magnet, helping to attract businesses and business owners who choose to make Boca Raton their home.

And it is a beehive of activity, where if you wait long enough you’re likely to see celebrities, high-powered CEOs and sports stars.

Yet the Boca Raton Airport remains somewhat of a mystery to many in the area who drive by it every day on Interstate 95 but know little about its day-to-day operations and its  impact on the community.

“We are a major amenity for people who want to come into the area in a convenient, safe and secure manner,” says Clara Bennett, the Boca Raton Airport Authority’s new executive director. Bennett came aboard early this year after spending more than 20 years at Fort Lauderdale Executive Airport, rising to the position of executive director in 2004. “Most of what happens here is related to the business activity in the area.”

In all, there are more than 48,000 takeoffs and landings at the airport each year, with jets making up about 35 percent of the flights. It is the only general aviation airport in Palm Beach County capable of accommodating private jets.

“Boca is a first-class city and it has a first-class airport,” says Jim Costa, president of the Boca Raton Pilots Association. “The airport provides everything the city needs to achieve its goal as a business hub and a convention destination. It’s very convenient and it’s very well run.”

Built in 1936 as a general-aviation city airport for small planes, the airport was temporarily used by what is now known as the U.S. Air Force as a radar-training school from 1941 until 1948, when it reverted back to the city for general aviation use.

With an annual budget of about $4 million, the authority draws its revenues from businesses who pay rent to operate on airport grounds — including two national fixed-based operators that provide hangar and aircraft services, and several non-aeronautics leaseholders, including a movie theater, a hotel and a furniture store on airport’s west side.

The airport also receives revenues from fuel-flow fees paid by pilots and is essentially self-sustaining, receiving no local tax dollars.

It does, however, depend on the federal government to pay for staffing of a control tower built in 2000. That cast the airport into the headlines just last year when the FAA, as a result of federal budget cutbacks, threatened to stop funding the tower.

With funding restored, the tower continues to operate uninterrupted, but Bennett says the authority is keeping a close eye on the federal budget process to make sure money is available in the next fiscal year.

For Bennett, 45, who came from an airport six times the size of Boca’s, taking on the job as executive director was a chance to get back to doing what she loves best — running day-to-day airport operations.

A licensed pilot with a degree in aviation management, Bennett was one of nearly 50 applicants seeking the $165,000 per year job, which became open when longtime airport director Ken Day died unexpectedly in June.

While working for the city of Fort Lauderdale, Bennett’s responsibilities had expanded to include non-airport-related functions.

“This was a chance to get back to running an airport, which is what I really enjoy,” she said. “It’s also a chance to work directly with the authority members to implement their vision.”

Next up on Bennett’s radar screen is the continuing feasibility study of bringing a U.S. Customs station to the airport, which would make it possible for flights coming from overseas to land there directly without having to stop first at another field. If that idea does have wings, it will be at least three to five years before a station would be operational.

Bennett is also working with a new fixed-based operator, Atlantic Aviation, a national company with a reputation for quality standards, which recently purchased Boca Aviation.

In the interim, she is focused on quantifying the beneficial impacts the airport has on the community, making sure it remains financially strong, and continuing to enhance the amenities it offers to the high-end clients who have a big impact on the community.

“The economic impact of the airport is huge,” Bennett says. “Everyone who comes through here gets out of their plane and spends money in local hotels, restaurants and shops.” 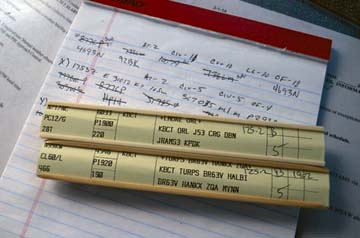 Air traffic controllers generate a record of each flight.

The airport has more than 48,000 takeoffs and landings each year.

Myths about the Boca Raton Airport

Here are five misconceptions about the Boca Raton Airport:

Myth: It is owned and operated by the city of Boca Raton.

Fact: The airport is owned by the state and operated by the Boca Raton Airport Authority.

Myth: It is paid for with local tax dollars.

Fact:  All of the operating costs of the airport are paid from fuel-related revenues and leases.

Myth: Commercial planes can fly out of the airport.

Myth: The airport is used mainly by recreational and weekend pilots.

Fact:  While that was the case years ago, most of the flights in and out of the airport today are related to business.

Fact:  IBM, in fact, was not a large user of the airport.