Although the Delray police said that the driver was not at fault, and that the “bicyclist was totally at fault,”the finding may not be that simple. [Police clear driver in fatal bike collision, February edition]
SAFE believes that the circ 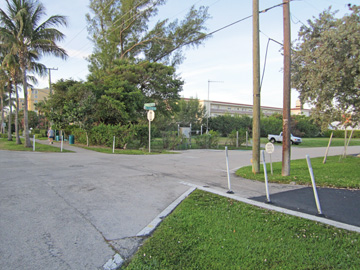 umstances and the physical limitations of that intersection must be further analyzed and corrective action taken.
According to the police, the truck involved was a commercial vehicle carrying a roll-off trash bin, and “because of the height of the truck, the driver would not have been able to see the bicycle when he began the turn.”
When you look at these two photos, you’ll see that there is no possible way such a truck could stay within the travel lane when making a right-hand turn. The photo shows two sets of 3-foot-tall poles lining each side of the street, and a “local truck only” sign in recognition of the danger that exists. You can also see the hole where the corner-most, fourth pole was, before it was knocked out recently.
Most crashes result from several events. In this case, one of the major causes may not have been “who” was at fault, but “what” was at fault.
SAFE believes that the Florida Department of Transportation and the city of Delray Beach should work together to widen the road so that turning vehicles have enough road space to remain in their proper travel lane.
For if they do not, there will certainly be more crashes at this location. No one should die needlessly again under the wheels of a truck.